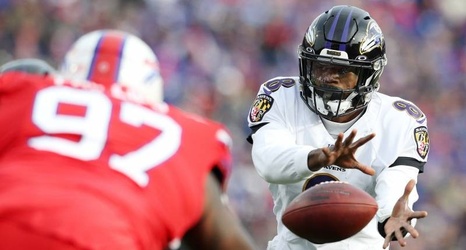 We're in the thick of it now.

Week 14 in the NFL brought with it the first game of the final month of the 2019 regular season—and three games featuring a pair of teams who would be in the playoffs if the season ended today.

In Buffalo, the Baltimore Ravens won a defensive battle over the Bills, solidifying their claim to the title of the AFC's best team and Lamar Jackson's claim to be named NFL MVP.

In Foxborough, the Kansas City Chiefs accomplished something that hadn't been done since 2015—a win by the visitors in December in Gillette Stadium.