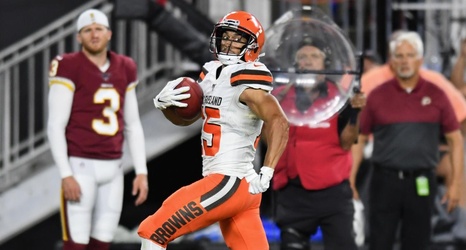 Browns rookie Damon Sheehy-Guiseppi scored a punt return touchdown for Cleveland in its preseason matchup with the Redskins on Thursday, but his score was not a run of the mill exhibition TD.

Sheehy-Guiseppi joined the Browns after earning a workout in truly unconvential fashion. The 24-year-old was previously sleeping outside in Miami and spent "his last $200 on training services" with NFL trainer Pete Bommarito, according to the Browns. Sheehy-Guiseppi then attended a workout with Cleveland vice president of player personnel Alonzo Highsmith, but was only allowed entry after talking his way past security.

Sheehy-Guiseppi is the perfect longshot story for the preseason, and the Browns celebrated accordingly following his return touchdown against Washington.