Bears continue to praise Floyd's quiet season, but will they pay him top-10 money in 2020 option year? 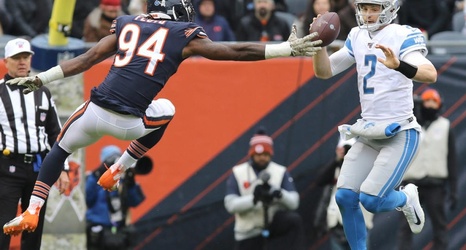 It's hardly a revelation to point out that Bears OLB Leonard Floyd's production isn't commensurate with his draft status.

The ninth overall pick in the 2016 draft is stuck on a career-low three sacks and has yet to get his hands on a football, much less force a takeaway, which he did at least once in each of his first three seasons. Considering this is his first full season in the enviable position of lining up across from Khalil Mack, and no defender was pumped up more by a new coaching staff and many of his old teammates than Floyd this offseason, it's fair to say he's failed to fully capitalize.