At Tennessee Titans Games, the Fiercest Tailgaters Are Kurds 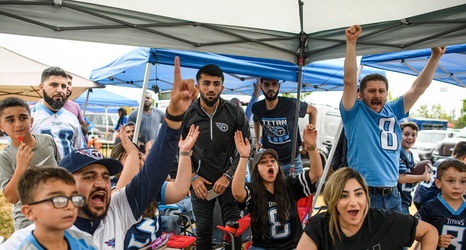 NASHVILLE — The parking lot of Nissan Stadium was mostly empty at 8 on a recent Sunday morning, save for those dedicated few who had shown up early to stake out a spot for the tailgate before the game between the Tennessee Titans and the Buffalo Bills. The fans set up their tents, hung their Titans flags, unpacked their packets of hamburger buns and filled their coolers with ice and beer.

One group, though, was doing things a little differently. These tailgaters had the tents, the hamburgers, the flag and the coolers, but they also set out silver trays of biryani.