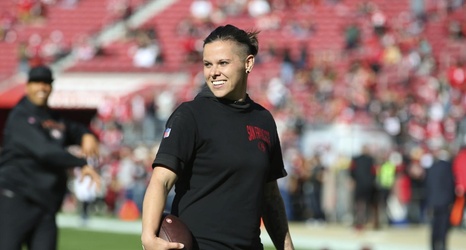 The Super Bowl is arguably the biggest night in the professional football world. This year, the Kansas City Chiefs are making their first appearance in the Super Bowl in 50 years. They'll face off against the San Francisco 49ers, whose last Super Bowl appearance was in 2012.

While the game could be historic for a number of reasons, one person on the sidelines will be making history in her own right. Katie Sowers, offensive assistant coach of the 49ers, will be the first woman and first openly gay person to coach during a Super Bowl game.

Sowers got her start with the 49ers as a 2017 Bill Walsh Minority Fellow and has been with the team since then.