100 Photos From a Century of Football 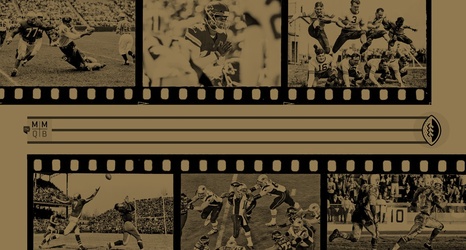 Pro football, born on the muddy fields of Canton, Dayton and Decatur, now plays out in billion-dollar pleasure domes across the country, and even overseas. At its core, through a century of the NFL, the game has been marked by visceral energy and phenomenal athleticism, pageantry and pain, cheers and tears. Herewith, 100 photos that capture pro football’s sometimes rugged, always compelling artistry.

John Elway rambles past the Browns in the AFC Championship Game at Cleveland Municipal Stadium, January 1987.