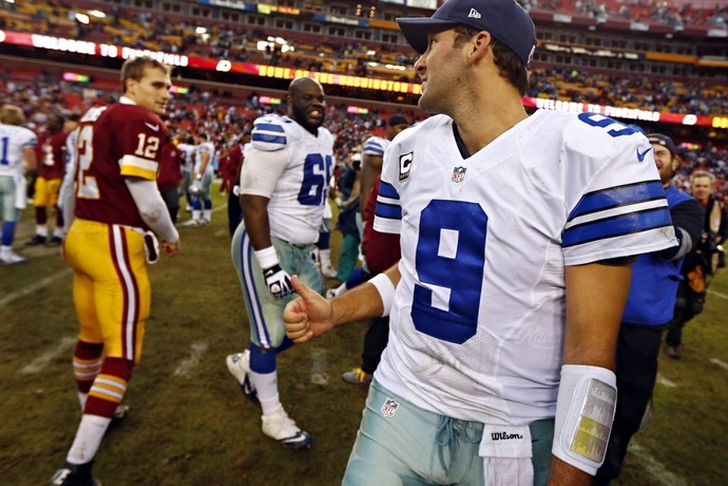 Dallas Cowboys quarterback Tony Romo and Washington Redskins quarterback Kirk Cousins have both been at the center of various trade rumors throughout the past few weeks, yet there is one potential deal teams are discussing that would involve both players.

According to Ian Rapoport of NFL Network, the Cowboys, Redskins and San Francisco 49ers have discussed a possible trade that would send Cousins to the 49ers, Romo to the Redskins and draft picks to the Cowboys.

As #Redskins & #49ers discuss a potential deal for QB Kirk Cousins in the near future, I’m told they may include the #Cowboys (Romo) as well

There is no word on what draft picks Dallas would get in return, but one of them would likely be the No. 2 overall pick currently owned by the 49ers.

Romo, who will be 37 next month, has said that he expects to be released instead of traded, but Dallas would like to get something in return for him. He lost his starting job to Dak Prescott last season, and is owed $20 million in 2017. Because of that, the Cowboys seem to have decided to get rid of him, whether that be via a trade or a simple release.

Romo has reiterated that he wants to go somewhere he can start, and ESPN's Ed Werder reported that Romo is most interested in signing with the Texans. However, he also reportedly wants to join a team that will play Dallas, which the rival Redskins do twice a year.

He played just one drive this season, completing 3/4 passes for 29 yards and a touchdown. In his last full season in 2014, Romo threw for 3,705 yards with 34 touchdowns and just nine interceptions.

As for Cousins, Washington franchise tagged him for the second straight year in hopes of working out a long-term deal with him, but don't yet appear to be completely sold on his future with the franchise. Cousins has said that if he does get traded, he would like for it to be to the 49ers given his relationship with new San Francisco head coach Kyle Shanahan, who used to be the offensive coordinator of the Redskins.