Predicting Every NFL Team's Record In 2017 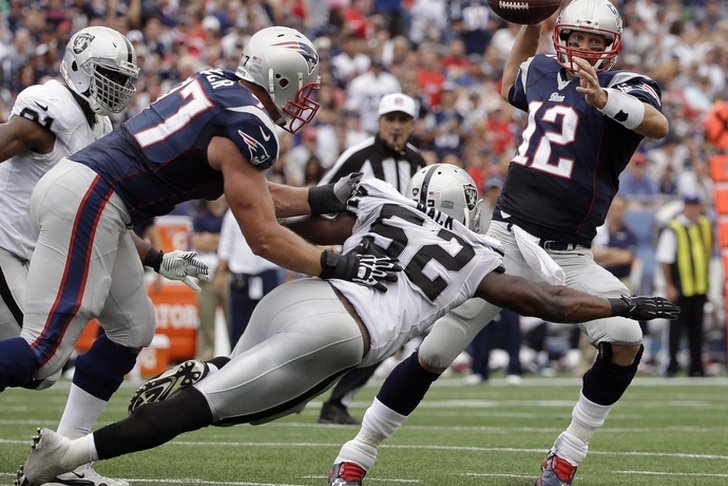 NFL teams have begun preparations for the upcoming year as rookie minicamps have kicked off, and OTAs are right around the corner. As such, it's time to start looking ahead to the regular season. Vegas has released their projected win totals for every team, but not every team will hit those. Here are the projected record for all 32 NFL teams from Chat Sports:

AFC East
New England Patriots: 14-2
Would it be surprise to see these Patriots, with all of their offseason additions, go undefeated? Certainly not. But, they have a few tough games where they could slip up.

Miami Dolphins: 8-8
Miami surprisingly made the playoffs last year, and I think they'll be in contention to make it again as a wild card.

Buffalo Bills: 6-10
The Bills have some talent, but also have a lot of holes - particularly at wideout and on defense - that will lead to a losing record.

New York Jets: 2-14
With no viable quarterback option, the Jets are going to be terrible.

Cincinnati Bengals: 8-8
The Bengals struggled with injuries last year, but have enough talent to compete for a playoff spot again.

Baltimore Ravens: 8-8
Could the Ravens miss the the playoffs for a 3rd straight year? They're close to breaking through, but have a young defense and no running game.

Cleveland Browns: 2-14
It's going to be another tough year in Cleveland, but they will win one more game than they did in 2017.

TRENDING: These 20 Players Led The NFL In Merchandise Sales This Year

AFC South
Houston Texans: 10-6
Houston will win the division for a third straight year. When (not if) Deshaun Watson becomes the starting quarterback early in the season, the Texans will take off and gradually get better as the year goes on.

Tennessee Titans: 9-7
​I know Tennessee is hoping for a breakthrough season, and they will be competing for a playoff spot. Don't be surprised if they win this division.

Indianapolis Colts: 7-9
Sorry, Colts fans. There is still too much of a talent and depth deficit for Andrew Luck to carry them to the playoffs.

Jacksonville Jaguars: 4-12
Jacksonville will be a much better team thanks to some key free agency additions, but until Blake Bortles improves, they're not going to be good.

AFC West
Oakland Raiders: 13-3
Watch out for the Raiders this year. Here's a game-by-game breakdown of their schedule.

Denver Broncos: 9-7
Denver's success this season will completely depend on how Trevor Siemian and/or Paxton Lynch perform under center. Their defense is good enough to keep them competitive, though.

Kansas City Chiefs: 9-7
The Chiefs record won't be as good as it was last year, simply because they have one of the toughest schedules in the league.

Los Angeles Chargers: 5-11
Can the Chargers stay healthy this year? It's been a problem that has plagued them each of the last two seasons.

NFC East
Dallas Cowboys: 11-5
Another NFC East title for the Cowboys. Here's a game-by-game breakdown of their schedule.

New York Giants: 9-7
The Giants have several tough games that will keep them from winning the division, but they will be competing for a playoff spot.

Philadelphia Eagles: 7-9
Carson Wentz and the Eagles are going to be really good, but they're about a year away from really competing for a playoff spot.

Washington Redskins: 5-11
The Redskins are going to suffer from the front office turmoil and general dysfunctions this offseason. When Kirk Cousins doesn't want to be there, there will be problems.

NFC North
Green Bay Packers: 11-5
Green Bay could struggle early in the season as they break in rookies in key roles. However, Aaron Rodgers & Co. will right the ship sooner or later.

Detroit Lions: 10-6
It's time for Matthew Stafford to become consistent. I expect him to build on a great year in 2016 with another outstanding performance in 2017.

Minnesota Vikings: 7-9
Minnesota simply doesn't have enough offense with Sam Bradford to be a playoff team, as we saw following their collapse last season.

Chicago Bears: 2-14
The good news for Chicago's rebuild is that they'll get another high draft pick.

NFC South
Tampa Bay Buccaneers: 11-5
The Bucs are going to be the breakout team in 2017. Jameis Winston has a ton of weapons, and their defense is finally good enough to complement the offense.

Carolina Panthers: 10-6
Expect the Panthers to get back to the playoffs after missing them in 2016. The front office gave Cam Newton more offensive weapons and improved their secondary this offseason.

Atlanta Falcons: 9-7
Without Kyle Shanahan running the offense, I think Matt Ryan & Co. take a step back. A tough schedule hurts them.

New Orleans Saints: 7-9
A fourth straight 7-9 season for the Saints ends in them "mutually parting ways" with Sean Payton. They still just don't have enough on defense to compete in this tight division.

NFC West
Seattle Seahawks: 11-5
Seattle won't have any competition at the top of the division. Here's a game-by-game breakdown of their schedule.

Arizona Cardinals: 9-7
The Cardinals will benefit from a weak schedule, but I don't think we'll see them make the playoffs. They're a team on the decline.

Los Angeles Rams: 4-12
As good as their defense is, there's only so much upside with Jared Goff as your quarterback.

San Francisco 49ers: 2-14
The Niners need a ton of help offensively, but have the foundation for a solid defense in place. That will get them a few wins.