Power Ranking The Last 10 No. 1 Picks In The NFL Draft 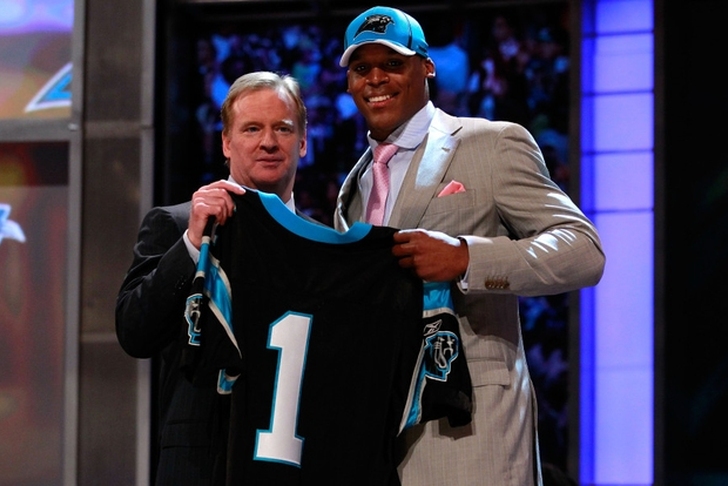 Not every No. 1 overall NFL Draft pick ends up being Peyton Manning: a franchise-savior who gets a team a Super Bowl win or two. But the hope is that those players end closer to Manning than JaMarcus Russell. But which picks of the past decade developed into the best players?

A big shout-out to Pro Football Reference's "Approximate Value" score, which provided the basis for the rankings. To avoid a bias toward older players, each player had their approximate value averaged out for each year. The rankings do still favor more established players. With that in mind, here's a power ranking of the last 10 No. 1 overall NFL draft picks.

Yeah, so the approximate value REALLY does not like Jared Goff. He actually came in with a negative score at -2. That's "2009 JaMarcus Russell" bad. Goff was not good at all in seven starts his rookie year, but there's really nowhere to go but up. New head coach Sean McVay should be a major boost to Goff's development.

Thanks to Goff's brutal rookie year, Garrett actually doesn't rank 10th. He has a bright future as a pass rusher in Cleveland, who made the correct decision taking Garrett. He could end rise up this list quickly.

AV average probably doesn't do Clowney justice. He's hurt by an injury-filled rookie year in which he had just five tackles. But he has improved each season since and was really good in a Pro Bowl year in 2016. So, he ranks low for now, but that likely won't be the case for much longer. In another year or two, he should rank in the top half.

Despite a terrible offensive line, 2016 was probably Bradford's best season. He completed 71.6 percent of his passes for 3,877 yards, 20 TDs and only five picks. All of those but the TDs are career-highs. Bradford didn't turn out to be the franchise QB the Rams wanted, but he's become a solid starting QB in the NFL. Missing an entire year with an injury did bring down Bradford's AV average.

The first four years of Jake Long's career were his best. He played in all 16 games and looked like a franchise left tackle. He made four Pro Bowls and was named first-team All-Pro in 2010. But then, the injuries started to mount and Long wasn't the same. He never played in all 16 games after those first three years and was limited to just 15 total in the last three years. Long was by no means a bust, but the injuries prevented him from being as great as he could have been.

Don't knock Fisher too much for coming in near the bottom. The 2013 draft class was just brutal (the bottom of the first has turned out better than the top) and the Chiefs actually made the right move by going Fisher instead of Texas A&M's Luke Joeckel. He's been a good enough starter for the Chiefs, although the large contract the Chiefs gave him this offseason was a surprise.

The past two years (plus a really good 2011) have been perhaps the two best for Stafford. He's improved his numbers across the board under Jim Bob Cooter and has firmly established himself as a franchise QB. Even if Stafford never wins a Super Bowl, he was worth the No. 1 overall pick in 2009.

That Winston ranks this high after just two years is a testament to how good he's really been. He improved across the board in 2016 and could be ready to take the leap from "young and talented" to "young and established" in the same way Derek Carr did last year. The future is very bright for the wee baby Jameis.

There's no doubt Luck was the right pick for the Colts, as he turned the franchise around in an instant. He's carried the Colts, which has led to several injuries and too many turnovers. Luck struggled through an injury-plagued 2015 season, but he's worth the massive contract the Colts gave. He's one of the best young players in the NFL.

Yeah, so the pick of Cam Newton has turned out really well for the Panthers. He's already won one MVP, in the year he lead the Panthers to the Super Bowl. He wasn't anywhere near as good in 2016 as he was in 2015, but he's become a true franchise QB. Provided he can stay healthy, the dynamic dual-threat is on pace to be one of the best picks this decade.