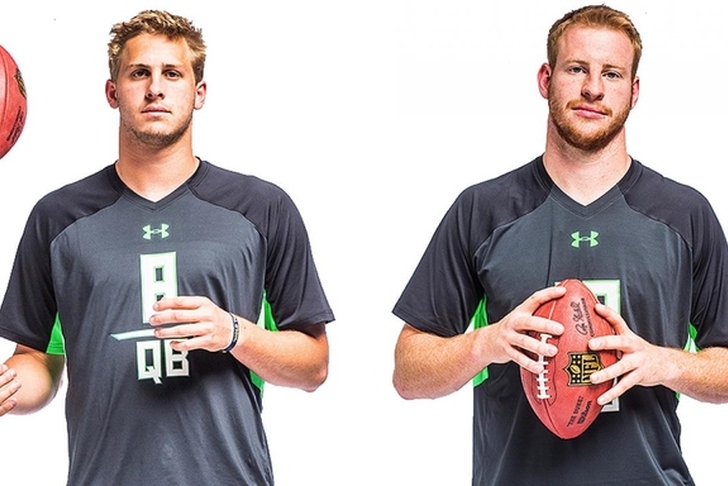 Over the last two seasons in the NFL we have seen a plethora of young talent come into this league, especially at the quarterback position. This is critical because the future of the league is in the hands of these young men due to the fact that so many great quarterbacks are older and sooner or later will retire. I love to think that Tom Brady will play until he is 50 and he very well might be able to but it isn't realistic to think he will play that long. The NFL is built on solid quarterback play, just ask any Green Bay Packers fan this season. The NFL as a whole and many franchises are relying on these young quarterbacks so I went and did a power ranking of the best quarterbacks who have been drafted in the last two years, if you agree or disagree with my power ranking then share your opinion with me on Twitter @MitchellRenz365.

13.) Connor Cook - Oakland Raiders
Cook has started two games in his career, one was a regular season game and the other was in the playoffs. Cook was called upon when Derek Carr suffered an injury that ended his season in 2016. Cook in those two games combined for 32- 66 pass attempts for 311 yards, two passing touchdowns, and five interceptions.

12.) Christian Hackenberg - New York Jets
Hackenberg has yet to see any NFL regular season action but from the preseason performances he has shown, he hasn't left me or any other NFL coach, confident in his ability. He has been on a decline since his Freshman year at Penn State.

11.) Cody Kessler - Cleveland Browns
Kessler has played in 12 regular season games, with six touchdowns and three interceptions. His arm strength is lacking but he is careful with the football. Kessler is a game manager type of quarterback who will most likely be a career back-up in this league.

10.) Paxton Lynch - Denver Broncos
He should be even lower because of his horrible facial hair but he found his way into the top 10. A first-round pick in the 2015 NFL Draft, Lynch has been a roller coaster ride for the Broncos with his inconsistent play. He has the talent but lacks the mental awareness to be a reliable quarterback in the NFL.

9.)  C.J. Beathard - San Francisco 49ers
Beathard now has six starts in the NFL and has a 1-5 record as a starter. He has four touchdowns and six interceptions this season but has played decent considering the offensive options around him. He has however lost the starting quarterback job to Jimmy Garoppolo who the team traded for from the Patriots.

8.) Deshone Kizer - Cleveland Browns
Kizer is still a very raw quarterback who shows glimpses of his upside with his ability to stretch the field and then the next play reminds us he is still just a rookie with an easy interception. Kizer leads the NFL with 14 interceptions but he has been mishandled this season by Hue Jackson and this Browns team.

7.) Jacoby Brissett - Indianapolis Colts
Brissett was drafted by the Patriots and traded to the Colts this season after they realized Andrew Luck was going to be out longer than expected and Scott Tolzien wasn't the answer. Brissett this season has shown great maturity and has received high praise from his teammates. Brissett may not be the most talented quarterback, but this kid is a gamer.

6.) Patrick Mahomes - Kansas City Chiefs
Mahomes was drafted 10 overall in the 2017 NFL Draft and is arguably the most physically gifted quarterback in this year's past draft. His arm strength is truly elite, he just has a lot to learn in regards to decision making and footwork if he wants to be a reliable starter in this league. The Chiefs have lost five of their last six games and it maybe only a matter of time until the fans want to see Mahomes.

5.) Mitchell Trubisky - Chicago Bears
Trubisky was drafted second overall in the 2017 NFL Draft and on a very limited Bears offense, he has been impressive. He has four touchdowns, four interceptions with 1,135 yards this season which considering the options in his receiving corps is decent for a rookie. He has shown leadership characteristics in the huddle and has the talent to be a good quarterback in this league.

4.) Deshaun Watson - Houston Texans
Watson has well on his way to winning NFL Rookie of the Year before he tore his ACL at practice. In seven games, Watson threw for 19 touchdowns, 1,699 yards and also rushed for 269 yards and two touchdowns. He was on pace to shatter the NFL record for touchdowns by a rookie quarterback.

3.) Dak Prescott - Dallas Cowboys
Dak was terrific in his rookie season with 23 touchdowns and four interceptions leading the Cowboys to a 13-3 record and first-round bye in the playoffs. This season he has been exposed more due to the suspension of running back Ezekiel Elliott which makes me question how great Prescott truly is. He has three more games without Elliot to prove me wrong.

2.) Jared Goff - Los Angeles Rams
Goff struggled as a rookie but has flourished in a new offensive under new Head Coach Sean McVay. Goff with his 18 touchdowns and only five interceptions is leading a Rams team that is currently in first place in the NFC West with an 8-3 record. Goff is winning in big games and continues to improve as the season goes on with his nine touchdowns and one interception in the month of November.

1.) Carson Wentz - Philadelphia Eagles
Wentz is hands down the top quarterback on this list for his amazing improvement from his rookie season to his sophomore season. Wentz leads the NFL in Passing touchdowns this season with 28 and is an MVP candidate. The Eagles are the best team in the NFL right now with their 10-1 record and the main reason is the play of their sophomore quarterback.