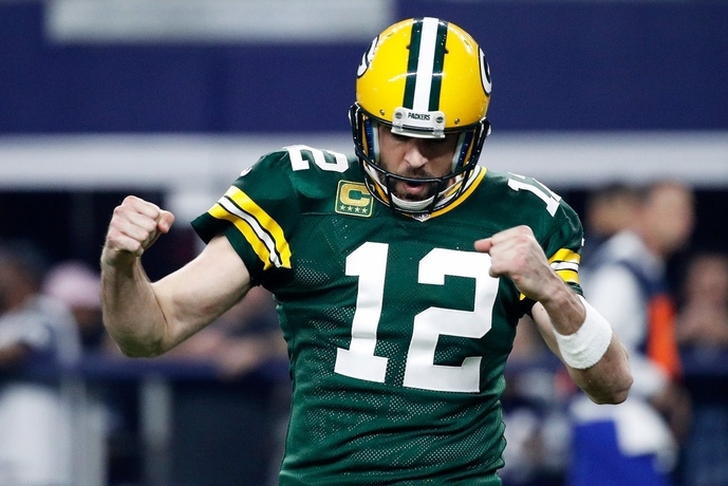 Despite the Green Bay Packers jumping out to an early 21-3 lead in the second quarter, the Dallas Cowboys found a way to tie the game at 28 with about four minutes left in the game. In those final, chaotic four minutes, the Mason Crosby netted a a 56-yard field goal with 1:33 left and then Dan Bailey drilled a 52-yarder with 35 seconds left. Rodgers had two timeouts and 35 seconds and somehow found Jared Cook for a 36-yard gain on 3rd and 20. That led to an 51-yard Mason Crosby field goal as time expired to win the game.

Here's the video of the Cook pass and the Crosby field goal.

3rd and 20. Aaron Rodgers hits Jared Cook for 36. Unbelievable. #Packers will have chance to win it. #GoPackGo pic.twitter.com/6tWW5j3sqI

IT'S GOOD! Mason Crosby from 51-yards wins it for the #Packers as time expires! #GoPackGo #GBvsDAL pic.twitter.com/f4AqXJh8WL

Rodgers once again carried his team. He completed 28 of 43 passes for 356 yards, 2 TDs and a pick, shouldering most of the burden for his team. The ground game had only 17 carries for 87 yards, 16 of which came from Rodgers. Ty Montgomery did have two TDs on the ground.

Dak Prescott, forced to air out more because of the deficit, responded well. He threw a bad pick, but completed 24 of 38 passes for 302 yards and 3 TDs. His favorite target was Dez Bryant, who had a monster game. Bryant racked up 132 yards and two TDs on 9 catches.

Ezekiel Elliott didn't get the volume the Cowboys would have wanted, but still racked up 125 yards on 22 carries. Prescott chipped in 13 on the ground as well, plus a two-point conversion that tied the game.

The Packers will get the Atlanta Falcons in the NFC Championship game Sunday.