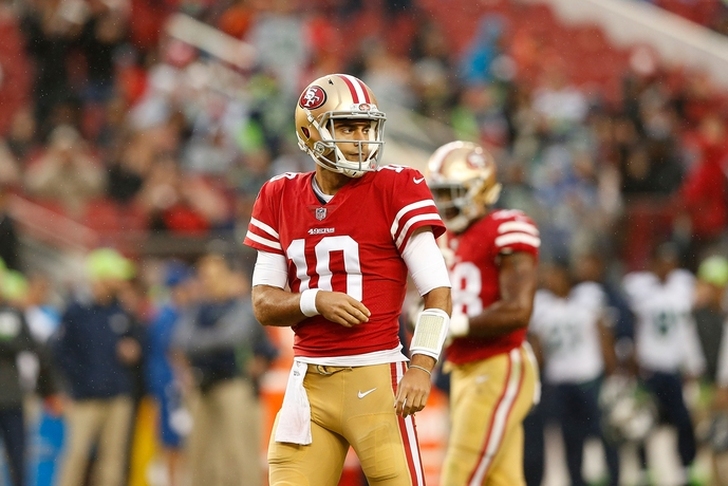 Impressive Jimmy Garoppolo Debut:
In Jimmy G’s first start in the red and gold, he produced much-needed hope to the 49ers fan base whom haven’t seen a winning record since 2013. Garoppolo completed 26-37 passes for 293 yards against a young and underrated Chicago Bears defense who are top half in the league in PPG and YPG this season. Garoppolo showed off his arm strength, where he completed 9 passes downfield of 15 or more yards, and a lot of poise and composure in the pocket, producing big on third downs where the 49ers completed on 55% of their attempts. While becoming 1-0 in his new gig, Jimmy G also vastly outplayed fellow young quarterback Mitch Trubisky, leaving Bears fans contemplating whether or not their team made the right decision in trading for a quarterback in this past draft as oppose to trading for the previously backup quarterback in New England, now the starter of the San Francisco 49ers.

The Jokes down in the AFC South:
Week after week the NFL world feels the aftermath of the Deshaun Watson injury more and more. The AFC South not only lost their best team in Week 8, but also their only true contender as well. Now, the Tennessee Titans and Jacksonville Jaguars sit atop the AFC South with records (8-4 each) that look much better than their actual play.

For Tennessee, Marcus Mariota is having the worst statistical season of his young career. Showing a 10:12 touchdown to interception ratio, he has already thrown the most interceptions in his career with 4 weeks left to play. Additionally, the best player in their offense, Derick Henry, is stuck in a timeshare and has only exceeded 15 carries in a game once while averaging an astounding 5 YPC. This team has a lot of issues, and frankly, nobody should be surprised once Tennessee decided to extend Mike Mularkey two seasons ago. Despite the pre-season hype, this team was and is never going to go anywhere with a mind-boggling offensive approach, and an underperforming defense giving up close to 24 PPG.

For Jacksonville the problem stems from the quarterback position. As the ex-GM Mike Lombardi constantly says on The Ringer’s GM Street podcast, “I cannot wait for the world to see Blake Bortles come January time on national television.” Although Jacksonville owns the best defense in the NFL and a sensational rookie running back in Leonard Fournette, their quarterback play has been the underlying factor that has kept them from being a true contending force. Unfortunately for Bortles, he can’t play the Colts every week. I can’t even fathom the pain Jaguars fans had watching Blaine Gabbert outplay Bortles two weeks ago. If the Jags want to make some noise, they need Bortles to manage games, not ruin them. As reasonable as that might sound, it won’t happen and if a team scores at least 20 points on their stout defense in the playoffs, I don’t see a way in which the Jaguars win.

When talking about these two teams I can state the following with confidence: records can be very deceiving.

LA Rams Injury Plague:
The football Gods have not been in Coach of the Year candidate Sean Mcvay’s favor. In their last three games, the Rams have lost notable players such as Robert Woods, Connor Barwin and now stud linebacker Alec Ogletree. The Rams have been one of the biggest surprises in the league this season, and to see it all meltdown right as they walk into the playoffs would be saddening. With Seattle getting its usual December groove back, the Rams only hold a 1 game lead on them for the division. Hopefully the Rams of Los Angeles can get healthy sooner rather than later.

Steelers vs Bengals: The most underrated rivalry in football
Am I the only one who looks forward to this matchup every single year? These games always consist of everything a football fan loves to watch: star players going head to head, a ton of hatred, hard, crushing hits and an epic collapse at the end of the game (Mostly by the team from Cincinnati). Unfortunately, in this particular episode we had to witness a horrible injury occur to star linebacker Ryan Shazier but everything else we wanted to happen, happened! Antonio Brown vs AJ Green, Juju Smith Schuster’s dirty, vicious hit on Vontaze Burfict eventually followed by another dirty shot to the head this time from George Iloka to Antonio Brown, and then like usual, the Bengals blow a 17-point lead. What a game. Possibly my favorite of the year so far.

Stock Watch: Wide Receiver Edition:
This is my favorite part of the whole column, pointing out a player or two that really impressed me this week who I believe all fans should keep an eye on. #ProgressionAlert

Josh Gordon:
After not playing for three years, Gordon looked like he didn’t miss a beat. Gordon caught 4 balls for 85 yards against Casey Hayward, arguably the best cornerback in football. The only other wide receiver to top the 85-yard mark against the Chargers this season is Odell Beckham Jr, not a bad person to be paired together with. Gordon used his big frame (6”3 225 lbs.) to jump up over defenders, and his rare speed to blow past cornerbacks and safeties. If you swapped Deshone Kizer for a competent quarterback in the league, we only could’ve witnessed an even bigger explosion from the Flash. Welcome back to the NFL Josh, we missed you!

Devin Funchess:
Although Carolina took a tough loss in New Orleans, and Funchess didn’t catch a pass until late in the third quarter, he did come up big when his team needed him. Funchess finished with a 4-60-1 stat line and showed some glimpses of what a number one wide receiver in the NFL looks like. Funchess, the 2015 second rounder out of the University of Michigan looks has the physical attributes of a prototypical go-to wide receiver. With his 6”4 height he creates mismatches over most cornerbacks and takes advantage. On his touchdown, Cam Newton threw a ball near the sideline that seemed a bit too high for Funchess. Yet, he swooped up and caught the ball over Ken Crawley while keeping his feet in bounds, and ran it in for a 24-yard score.

Funchess still struggles with dropped balls and consistent route running, but still at only 23 years old he is creeping up on a potential 900-yard season which began with him behind Kelvin Benjamin for the first 8 weeks. The progress he has made throughout the season is undeniable. If Carolina, sitting at 8-4, is going to make the post-season and a deep run they will have to keep using Funchess, as well as rookie Christian Mccaffery as the main options.