NFL Week 1: Predicting Every Game Against The Spread 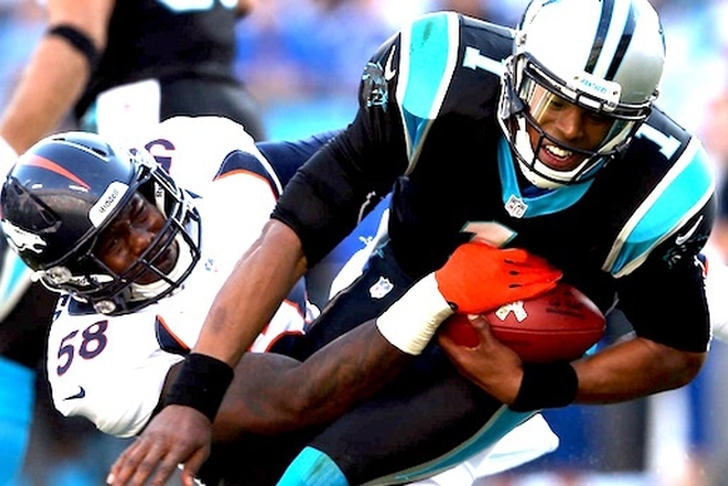 We're just one week away from the start of the NFL season, and if you're like us, you couldn't be more excited. All 32 teams will play their season opener next weekend, and betting lines for the games have been released and William Hill offers the best NFL online betting odds. Here's how we predict every game will go vs. the spread:

Carolina Panthers (-3) at Denver Broncos
The 2016 season kicks off with a rematch of Super Bowl 50, but this one should have a different result. For as dominant as the Broncos defense is, breaking in a first-time starter in Trevor Siemian against Carolina's defense is a recipe for disaster. Plus, the Panthers will be looking to get some sort of revenge for the Super Bowl loss.

Buffalo Bills at Baltimore Ravens (-3)
Buffalo's aggressive defense will give Baltimore problems, particularly their physical secondary against the Ravens' lackluster receiving core. Their stellar rushing attack, headlined by LeSean McCoy and quarterback Tyrod Taylor, should lead the Bills to a victory, but they should at least push this game.

Chicago Bears at Houston Texans (-5.5)
Houston's offense appears to be more advanced than many thought they would be after adding quarterback Brock Osweiler and running back Lamar Miller this offseason, and while Chicago's defense is improved, they still have plenty of holes and unproven players. Texans by a touchdown.

Tampa Bay Buccaneers at Atlanta Falcons (-3)
Atlanta fell apart down the stretch after starting 2015 with a 5-0 record, and I don't see them getting off to a great start in 2016. Tampa Bay is a much improved team, and the Falcons still have an incredibly weak secondary and no pass rush. Look for Jameis Winston to have a big day here as the Bucs win.

Oakland Raiders at New Orleans Saints (-1)
This one will be a good old-fashioned shootout. We all know what Drew Brees and the Saints are capable of, and the Raiders are set to be one of the most explosive offenses in the league with the disposal of weapons at quarterback Derek Carr's disposal. This game will come down to defense, and the Raiders' unit is much, much better than the Saints.

Green Bay Packers (-4.5) at Jacksonville Jaguars
Jacksonville is expected to have a breakthrough year this season, and while I believe that's the case, they simply don't have the firepower and overall talent to keep up with an experienced, dominant team like the Packers. They will cover fairly easily.

Minnesota Vikings (-3.5) at Tennessee Titans
Minnesota would've won this game easily with Teddy Bridgewater under center, but without him, that is very much in question. The Titans will be able to key on the run without a threatening passing attack from the Vikings, and with Tennessee's run-first offense, this will be one of Week 1's lowest scoring affairs. As a result, I don't expect anyone to win by more than three points - meaning the Titans will cover the spread.

Cincinnati Bengals (-2) at New York Jets
The Bengals have been a dominant regular season force for the past several years, and that will be the case again this year. They'll win by a field goal in a very close game.

Cleveland Browns at Philadelphia Eagles (-5.5)
Yikes, the Browns are a mess. Robert Griffin III has looked better than expected in the preseason, but he doesn't have a lot of weapons - and their defense isn't much better. I don't expect the Eagles to be very good this season either, yet they'll win this game by at least a touchdown.

San Diego Chargers at Kansas City Chiefs (-7)
Kansas City's surge to the playoffs was one of the biggest surprises in the NFL last season, and Vegas seems to be high on them again this year. However, the Chargers finally have a fully healthy roster - one that could compete for a wild card berth. They may not win this game, but they'll keep the difference smaller than a touchdown.

Miami Dolphins at Seattle Seahawks (-10.5)
The Seahawks are virtually guaranteed to win every game they play at home, and Russell Wilson should shred their suspect defense. At the same time, the Legion of Boom will have a field day against Ryan Tannehill. Seattle wins in a blowout.

New York Giants at Dallas Cowboys (EVEN)
This spread has dropped to even after Tony Romo's injury. However, Dak Prescott's production in the preseason (and yes, I know it's just the preseason) has given me enough faith to say the Cowboys' offense won't suffer too big of a drop off.

Detroit Lions at Indianapolis Colts (-4)
Without Calvin Johnson, the Lions have a lot of problems - they can't run the ball, can't stop anyone on defense, and now have no legitimate No. 1 receiver. Indianapolis should win this one pretty easily.

New England Patriots at Arizona Cardinals (-5.5)
The Patriots were actually favored to win this game before Tom Brady accepted his four-game Deflategate suspension. Now, Arizona's opportunistic defense should put forth a dominating performance against a first-time starting quarterback in Jimmy Garoppolo.

Pittsburgh Steelers (-3) at Washington Redskins
Pittsburgh enters the new season as a Super Bowl favorite, while the Redskins are the favorite in the NFC East, thanks to Romo's injury. Washington revamped their defense by adding Josh Norman, and if Kirk Cousins continues his strong play, I think the Redskins will win this game simply because they're at home.

Los Angeles Rams (-2.5) at San Francisco 49ers
The Rams have a good defense and one of the league's best running backs in Todd Gurley, but their passing game leaves a lot of be desired. The good news for them is that the 49ers are a disaster at virtually every position.