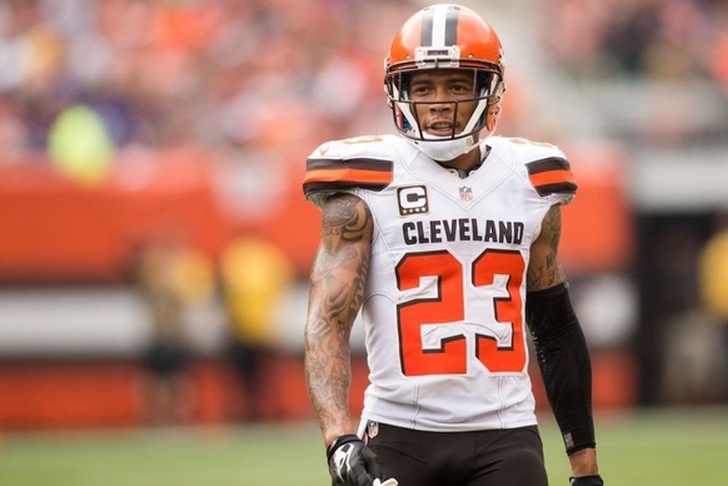 The NFL trade deadline is now just hours away (4:00 pm ET on Tuesday), and as a result, the trade rumors are swirling around the league. We've already seen one major move as the New England Patriots sent Pro Bowl linebacker Jamie Collins to the Cleveland Browns, and there are rumors that a new more big names could be dealt in the next 24 hours. Here are all the latest NFL trade news and rumors:

Browns taking calls on Joe Haden
Along with acquiring Collins, the Browns have said that virtually everyone on their roster (other than Terrelle Pryor) is available for trade. That includes Pro Bowl cornerback Joe Haden, who several teams have inquired about, according to NFL Network's Ian Rapoport (via NFL.com's Conor Orr):

According to Rapoport, Haden's name has been mentioned ahead of Tuesday's deadline. Once thought of as one of the NFL's top shut-down corners after Pro Bowl appearances in 2013 and 2014, Haden has struggled with injuries over the past two seasons. Last year he played just five games due to concussion issues.

Issues aside, adding a 27-year-old with excellent coverage skills could be attractive to a contender. One of the silver linings for Haden's time with the Browns is that he played with a cavalcade of coordinators over his first six NFL seasons, which means there are probably some interested clubs who could get him integrated into the lineup fast.

The bonus for Cleveland would be yet another draft pick or two to add to their 2017 stockpile. At 0-7, the Browns are obviously thinking of the future.

Haden, a two-time Pro Bowler, has 21 tackles with two interceptions so far this season.

Jets put Sheldon Richardson on trade block
The New York Jets have struggled to a 3-5 start this season, and that could mean that some of their veteran players may be available. According to Rapoport, one of those players is Sheldon Richardson, who they have put on the trade block and are taking calls about:

The trade deadline is usually quiet, but teams are calling about a big-name #Jets DL: Sheldon Richardson. There were talks. Will it pick up?

New York signed Mo Wilkerson to a long-term deal this offseason, signaling that the Jets are distributing their money elsewhere. Richardson, who made the Pro Bowl in 2014, has 28 tackles with 1.5 sacks this season.

There are numerous contenders who could use an upgrade at tackle—Seattle, Arizona, Denver, the New York Giants among them—and many of those teams have had internal conversations evaluating Thomas and Staley and determining what they would be willing to give up via trade. At this point teams believe the Browns (Thomas) and 49ers (Staley) are seeking greater compensation than the market will bear, though those price tags could drop by Tuesday.

Staley has spend his entire career with the 49ers and is a five-time Pro Bowler. He is under contract through 2019, and his base salary spikes from $5.4 million this year to $8.25 million in 2017.