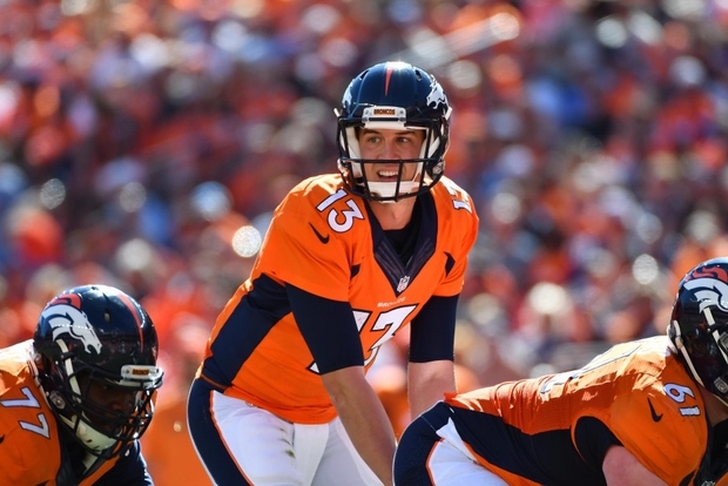 The NFL trade deadline is just one week away on Nov. 1 at 4:00 pm ET, and as a result, the trade rumors are swirling around the league. Several of the league's worst teams are looking to unload veterans for draft picks, while contending teams are looking for the missing piece that could be the difference for them in the playoffs. Here are all the latest NFL trade news and rumors:

Broncos trading for veteran QB?
The Denver Broncos are among the favorites to repeat as Super Bowl champions, but a two-game losing streak has raised questions about their quarterback play. Trevor Siemian is still the starter, but ESPN's Jon Gruden says the team should look into trading for a veteran QB:

The Broncos still have a championship defense. They have very good wide receivers. One question heading into their Monday Night Football matchup against the Texans in Week 7 is whether they can realistically win another Super Bowl with virtually zero experience at quarterback.

The Broncos get another shot to evaluate their 2016 prospects when Trevor Siemian starts against the Texans. Siemian and Paxton Lynch have long-term promise. They are the future. But the championship window for this defense will not stay this wide open forever, and if the Broncos' offense continues to sputter, a short-term move for Tony Romo or Jay Cutler before the Nov. 1 trading deadline should be a consideration, at least.

There are salary-cap implications and other considerations when deciding whether to make a bold move for a quarterback in the middle of the season (Denver could really use left tackle Joe Thomas if Cleveland trades him, but that's another subject for another day). Broncos general manager John Elway has shown no fear in making aggressive moves. He always seems to get the last laugh, and if Siemian outplays Brock Osweiler on Monday night, would anyone be surprised? But as the Broncos look at their offensive film from their current two-game losing streak, they will see the growing pains that often come with having a first-year starter behind center.

It remains to be seen if with Tony Romo or Jay Cutler are available. Dak Prescott has taken over the starting job in Dallas, but the Cowboys know how important it is to have a quality backup if Prescott gets hurt (or if Romo takes the starting job and gets hurt again). For Chicago, Cutler is set to return from a thumb injury this week, but backup Brian Hoyer is out for eight weeks with a broken arm.

Siemian has thrown for 1,054 yards, seven touchdowns and three interceptions this season.

Browns not shopping Thomas
The Cleveland Browns are the only winless team in the NFL, but have one of the best left tackles in the league in Joe Thomas. He is in his 10th season in the league, all of which have been with the Browns, and has never made the playoffs in his career.

There were rumors that the Browns were looking to deal Thomas, especially since they nearly traded him to the Broncos at the trade deadline last year, but head coach Hue Jackson shot down all of those rumors in his press conference today:

#Browns coach Hue Jackson is unequivocal today: “We are not going to trade Joe Thomas.” That does not leave any gray area.

49ers looking to trade Staley
Staley is another one of the league's top tackles, but the San Francisco 49ers are open to dealing him, according to Pro Football Talk's Mike Florio:

Staley, drafted in the same round (first) of the same draft (2007) as Thomas, has been tied to the same teams that have some degree of interest in Thomas: Vikings, Giants, Cardinals, Seahawks and, if the 49ers are willing to take whatever they can get, the Patriots.

While the Browns would deal Thomas for a second-round pick, a source with knowledge of the dynamics tells PFT the 49ers are angling for a first-round pick from a contender for Staley, which likely would come late in the round.

Staley has spend his entire career with the 49ers and is a five-time Pro Bowler.