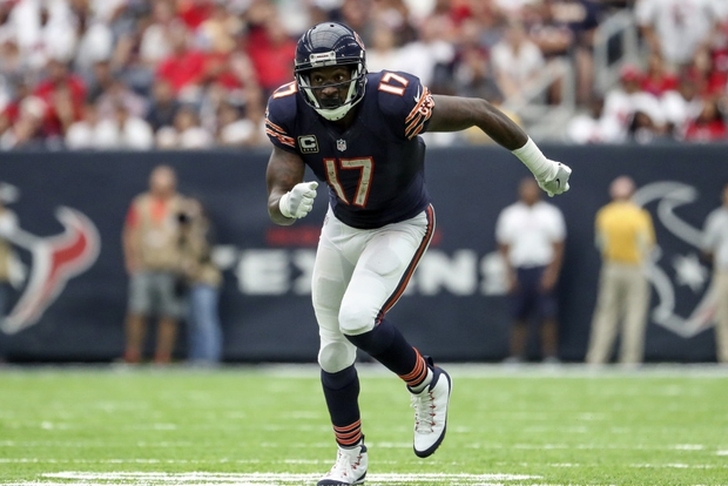 The NFL trade deadline is just one week away on Nov. 1 at 4:00 pm ET, and as a result, the trade rumors are swirling around the league. Several of the league's worst teams are looking to unload veterans for draft picks, while contending teams are looking for the missing piece that could be the difference for them in the playoffs. Here are all the latest NFL trade news and rumors:

Eagles targeting Alshon Jeffery?
The Philadelphia Eagles are rumored to be looking into upgrading their receiving core before the trade deadline, and Chicago Bears wideout Alshon Jeffery is one player they're targeting, according to NJ.com's Eliot Shorr-Parks:

One big name that is expected to be available is Chicago Bears wide receiver Alshon Jeffery, and speculation is already starting that the Eagles could inquire about trading for the 6-foot-3 wideout.

A trade would of course depend on what the Bears wanted in return.

Jeffery is a free agent at the end of the season, and considering the Bears' situation at quarterback, it wouldn't be surprising if he left to sign with another team. If the Bears think he is prepared to bolt, they might want to trade him now, getting something for him as opposed to losing him for nothing this offseason.

If that is the case, and the Eagles would be willing to pay him this offseason, it wouldn't be surprising to see the teams pull off a deal.

Jeffery, who made the Pro Bowl in 2013, has has 32 catches for 520 yards and no touchdowns in seven games this season.

No deal is imminent, but the Eagles potentially acquiring Smith makes sense. He’s been disappointing while playing on bad offenses in two seasons with the 49ers, and the Eagles would love to bolster their receiving corps for a run at the NFC East title.

Smith is just 27, and depending on the 49ers’ asking price, the Eagles may not be the only team interested. Smith has 36 career touchdown catches, just six since joining the 49ers.

Smith has 13 catches for 199 yards and two touchdowns this season.

Staley has spend his entire career with the 49ers and is a five-time Pro Bowler. He is under contract through 2019, but his base salary jumps from $5.4 million this year to $8.25 million in 2017.