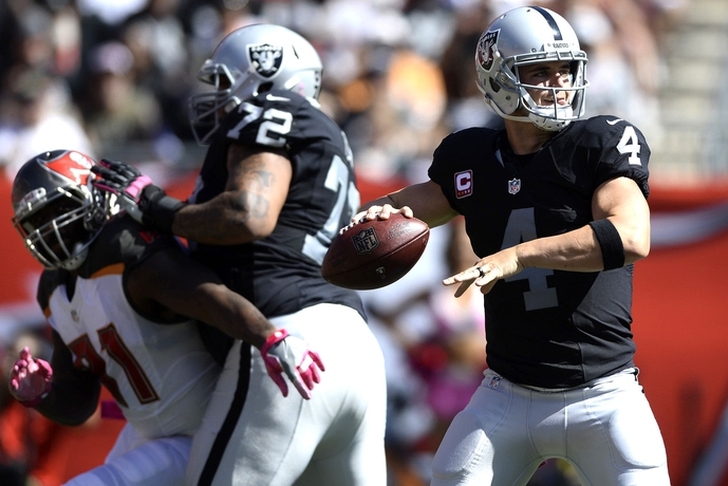 NFL teams have started preparations for the upcoming year as OTAs are now underway for a few teams. While there are still several big name free agents left unsigned, the top rumors today are on injuries, potential camp battles and contract extensions. Here are all the latest NFL rumors you need to know.

Derek Carr "Frustrated" With Contract Talks
The Raiders didn't spend a ton in free agency this year because they need to save money for the big deals that are coming for players like Derek Carr. But the franchise QB hasn't signed a new deal and NFL Network's Mike Silver reports Carr isn't too happy.

"Two sources said Carr, given his previously stated desire to be a 'Raider for life,' has grown frustrated with the slow pace of discussions and is extremely eager to get the deal done before the start of training camp," Silver writes. "... Two-and-a-half weeks since the draft's completion, the Raiders have yet to reach out to Carr or his agent -- and the quarterback's patience, sources say, is wearing thin."

The Raiders had said discussion on a new contract for Carr would start following the draft. It appears that hasn't happened yet, so it's easy to see why Carr is frustrated. A deal will get done, since the Raiders aren't going to let a franchise QB leave, but the two sides need to start working on it sooner than later.

Zay Jones Injury
The Buffalo Bills can't have anything nice and their shiny new offensive weapon is now hurt. Second round pick Zay Jones suffered a knee injury Thursday, the Buffalo News reports. The good news for the Bills is that Jones is only listed as "week-to-week," which means it's not a tear. It's not an ideal situation for the Bills, who were counting on Jones to play a key role in the offense. He should be the team's No. 2 WR going forward.

Hyde has been a solid player when healthy, but he's missed 14 games through his first three years. He's also entering the final year of his deal and the 49ers did spend a pick on Williams for a reason. Shanahan likes to use two running backs, so expect the backup to still get work.