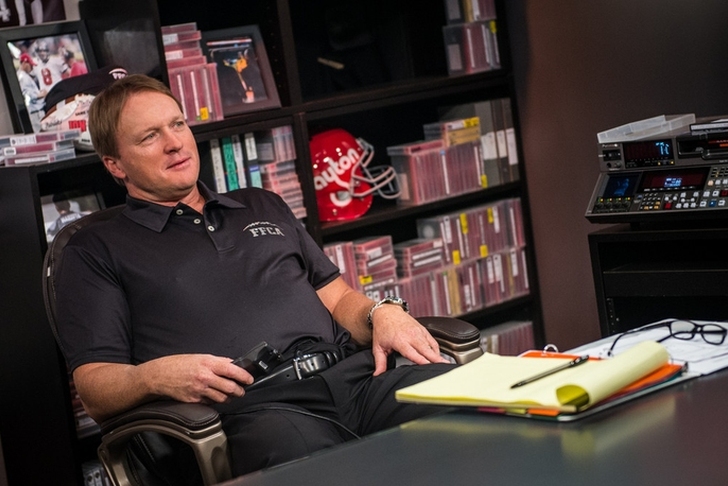 Week 11 of the NFL regular season kicked off last night with the Pittsburgh Steelers getting a resounding 40-17 win over Tennessee Titans, picking off quarterback Marcus Mariota four times. However, much of the league's attention is on the "civil war" brewing between Dallas Cowboys owner Jerry Jones and commissioner Roger Goodell, which started when Goodell reportedly told Jones that running back Ezekiel Elliott would not be suspended. We have the full details on that story here, but here are the other rumors you need to know from around the league:

Two teams could be interested in hiring Jon Gruden
Jon Gruden has been heavily linked to the open Tennessee Volunteers head coaching job, which he has called his "dream job" in the past and has reportedly started calling coaches about potentially joining him as assistants in Knoxville. However, there's a chance he's looking to return to the sidelines in the NFL - with the Oakland Raiders and Tampa Bay Buccaneers potentially interested in a reunion with him, according to Mike Florio of ProFootballTalk.

This time, it feels different — primarily because it’s coming from Gruden. He reportedly turned down the Colts earlier this year, in what would have been a pairing with Peyton Manning, who also wasn’t interested in running a team quite yet. The Buccaneers job makes the most sense, and Gruden will be returning in December to be added to the team’s Ring of Honor.

Also, as we’ve been saying on PFT Live and in the PFT PM podcast, don’t rule out the Raiders. A blowout loss to the Patriots on Sunday in Mexico could be the spark that gets owner Mark Davis to realize that the best way to sell tickets next year in Oakland, wherever they may be in 2019, and Las Vegas in 2020 could be to bring back Gruden as the head coach. If Davis senses that the Buccaneers are making a beeline for the coach that took them to their only Super Bowl victory, Davis may decide to move first, bringing back a guy whose impact on the final games in Oakland will be even more significant than Marshawn Lynch‘s bump for 2017.

Ty Montgomery not expected to play Sunday
Green Bay Packers running back Ty Montgomery will not play Sunday against the Baltimore Ravens due to a rib injury, head coach Mike McCarthy announced.

"I think Ty is going to be out this week," McCarthy said. "I don't think there's a long-term concern."

Montgomery has 71 carries for 273 yards and three touchdowns while catching 23 passes for 173 yards and another score.

Josh Gordon will practice next week
Cleveland Browns wide receiver Josh Gordon has been in the team facility since he was conditionally reinstated on Nov. 1 but hasn't been able to practice yet per the terms of that reinstatement. He can start practicing with the team on Monday, which head coach Hue Jackson said Gordon will do.

“He’s doing well,” Jackson said of Gordon. “He’s here in the building every day, on time for everything, involved and big smile on his face. He’s a pleasure to be around.”

Cleveland can add Gordon to their active roster on Nov. 27. From there, the Browns have until Dec. 4 to decide if they will keep him or release him. If Cleveland decides to activate him on Nov. 27, Gordon will be able to make his return to the NFL on Dec. 3 against the Los Angeles Chargers. If they wait until Dec. 4, Gordon's return will be on Dec. 10 at home against the Green Bay Packers.