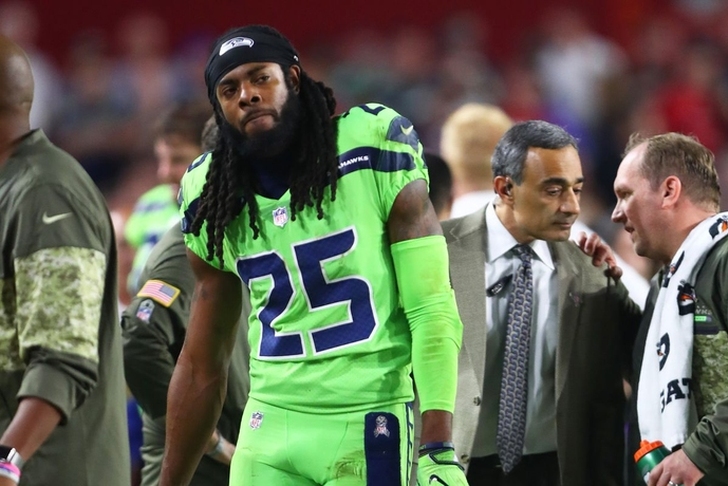 Week 10 of the NFL season got off to a rough start with the Seattle Seahawks suffering numerous injuries in a 22-16 win over the Arizona Cardinals on Thursday Night Football, including losing All-Pro cornerback Richard Sherman for the remainder of the season with a torn Achilles. This has also been a week of surprising releases this week with the Green Bay Packers parting ways with Martellus Bennett (who has since been picked up the New England Patriots) and the Indianapolis Colts cutting Vontae Davis.

As this weekend's games approach, Here are all the latest news & rumors you need to know:

Seahawks may part ways with Richard Sherman
Sherman remained on the sidelines after suffering his season-ending injury last night, sharing hugs with his teammates and offering advice to his replacements in the secondary. However, Mike Florio of ProFootball thinks that Sherman decided to stay on the sidelines rather than going to the locker room because it may be his last game with the Seahawks.

It’s possible Sherman decided to stay on the sideline in uniform because he realizes that there’s a chance it will be the last time he ever does that. With an $11 million salary and a $13.2 million cap number for 2018 and a 30th birthday coming on March 30, the Seahawks may decide to move on, with or without an effort to get him to take less money.

Sherman was available in trade earlier this year. When no deal happened, both sides tried to put the toothpaste back in the tube. While mostly successful, the issue lingers. And the injury at least keeps a divorce on the table.

Sherman finished the season with 35 tackles and two interceptions with seven pass breakups in nine games.

“A thorough review is underway,” the NFL said in a statement issued on Friday morning. “According to the policy jointed developed by the NFL and NFLPA, if the Concussion Protocol is not properly followed the club is subject to discipline.”

According to reports, Wilson did not undergo a full concussion evaluation and just repeatedly said "I'm fine" before being sent out on the field. He finished the game with 238 passing yards with two touchdowns and no interceptions.

Giants targeting Sam Darnold, Josh Rosen in draft
The New York Giants are also facing questions at the quarterback position. Eli Manning has not missed a start for them since he was drafted in 2004, and while he has played fine this season, New York's disastrous 1-7 record has them in position to draft one of the top quarterbacks in this year's class.

That is something the front office is evaluating and are targeting both UCLA's Josh Rosen and USC's Sam Darnold, according to ESPN's Jordan Raanan.

There was a directive given several weeks back by co-owner John Mara to start looking closely at the top college quarterbacks, multiple sources told ESPN. This occurred around the time it became apparent that the Giants’ season was headed nowhere, in part, because wide receiver Odell Beckham Jr. would be out with a broken ankle.