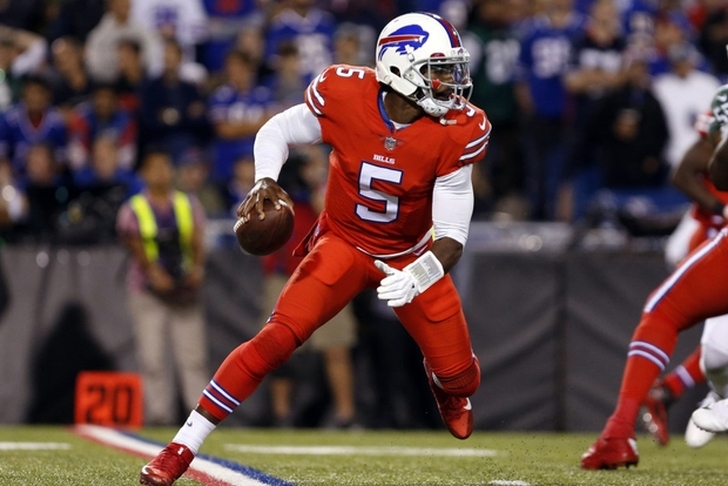 NFL teams have begun preparations for the upcoming year as rookie minicamps have kicked off, and OTAs are right around the corner. As such, some major quarterback battles are starting to take over headlines. Here are all the latest NFL rumors you need to know.

"He is, in Tyrod Taylor," McDermott said. "And then when you look at the competition we have behind him. We've drafted Nathan Peterman, we've added T.J. Yates, and then Cardale Jones in the draft a year ago. I'm not sure there is a team out there that has the depth that we do at the quarterback position. So we feel good about that. We're anxious to see how Tyrod develops in his third year as a starter in a new system, a system that he has some familiarity with in terms of [new Buffalo offensive coordinator] Rick Dennison's system in Baltimore a few years back with Gary Kubiak.

"We have open competition everywhere," he said. "Obviously it is a quarterback league, but with Tyrod ... He has some tools, his speed, he is tough to game-plan for. He has some strengths and he is still a young starter in this league. It is going to be a competition for every position, to let them fight it out and earn the right to start on this team."

Cody Kessler to get first crack at Browns starting QB job
The Cleveland Browns are going into the 2017 season with a competition at quarterback (again), but head coach Hue Jackson told ProFootballTalk and Cody Kessler is currently the starter until someone beats him out.

"They will all get reps," Jackson said. "Obviously, Cody will start this out. He deserves the opportunity to. Brock [Osweiler] is here and Kevin [Hogan] is, too, but [rookie DeShone Kizer] is going to get reps. The only way to get better is to get reps. I will find a way. I have been through this before a few times. We will get these guys reps, and he has to get some because I have to continue to evaluate him.

"They have to take it from him.They better take it from him because I know him -- he is not going to give it up. It will be fun. That is what competition is all about. Until someone takes something from someone and shows that they can do it at a high level play in and play out, then we have to keep going in the direction where we're traveling."

In nine appearances last season, including a handful of starts, Kessler passed for 1,380 yards with six touchdowns and two interceptions.

Cowboys to trade for veteran player
The Dallas Cowboys don't have much cap space right now, but with more becoming available after Tony Romo's release, Dallas will have some flexibility.

Cowboys vice president Stephen Jones said the team will look into using that flexibility to trade for a veteran player, according to Nick Eatman of DallasCowboys.com:

On June 2, an extra $5 million will hit the Cowboys’ cap thanks to the Tony Romo release. While a lot of that money will be used to fill out the 53-man roster, sign the practice squad and compensate for injury settlements and future signings, Jones said it frees them up to be sign or trade for a veteran if needed.

“I will say this, we’re not strapped to the point where we couldn’t do something. You never know when a trade might pop up.”

Dallas has been linked to New York Jets defensive lineman Sheldon Richardson this offseason, and if the Jets continue to make him available, that is a deal the Cowboys could look into pursuing.

The Cowboys currently have nearly $5 million in cap space, and the additional space will give them nearly $10 million to work with. Richardson is under contract for just over $8 million in 2017, the final year of his contract.

Dallas could also be a player for some of the top remaining free agents available.