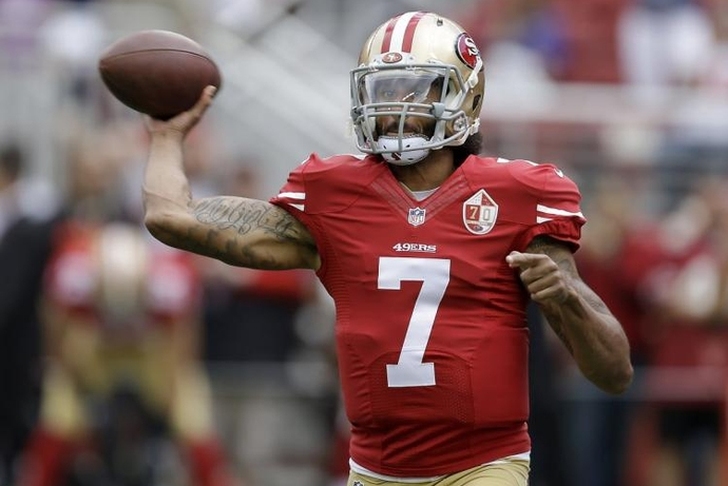 Why team's aren't signing Kaepernick
Former San Francisco 49ers quarterback Colin Kaepernick restructured his contract so that he could be a free agency this offseason, but there seem to be no teams that are interested in signing him. One AFC GM told Bleacher Report he believes there are several reasons behind that, one of being that President Trump will likely tweet negatively about the team.

“He can still play at a high level. The problem is three things are happening with him.

“First, some teams genuinely believe that he can’t play. They think he’s shot. I’d put that number around 20 percent.

“Second, some teams fear the backlash from fans after getting him. They think there might be protests or [President Donald] Trump will tweet about the team. I’d say that number is around 10 percent. Then there’s another 10 percent that has a mix of those feelings.

“Third, the rest genuinely hate him and can’t stand what he did [kneeling for the national anthem]. They want nothing to do with him. They won’t move on. They think showing no interest is a form of punishment. I think some teams also want to use Kaepernick as a cautionary tale to stop other players in the future from doing what he did.”

49ers general manager John Lynch said the team hasn't closed the door on re-signing Kaepernick, but after adding Brian Hoyer, admitted that it was an unlikely scenario.

Kaepernick passed for 2,241 yards, 16 touchdowns and four interceptions last year, while rushing for 468 yards and two more touchdowns in 12 games.

Eagles targeting Fournette, Cook
The Philadelphia Eagles were expected to select a wide receiver in the NFL Draft, but after adding Alshon Jeffery and Torrey Smith in free agency, they plan to actively target running backs in the draft, according to Bleacher Report's Matt Miller.

Finding a deep threat for Carson Wentz was a priority, and the team did that in free agency by signing Torrey Smith. The team then added Alshon Jeffery on a one-year deal. Now, look for the Eagles to be very aggressive in looking at a loaded running back class, according to a coaching staff source.

Leonard Fournette and Dalvin Cook are both scheduled to make pre-draft visits to Philadelphia, signaling that the Eagles are targeting the two top running backs in the draft.

ESPN hires Rex Ryan
Moving off the field now, former Bills and Jets head coach Rex Ryan has been hired by ESPN to appear on Sunday NFL Countdown, according to Manish Mehta of the New York Daily News.

The most entertaining NFL coach of this generation is taking his talents to Bristol.

The Daily News has learned that ESPN signed Rex Ryan to a multi-year deal to be on Sunday NFL Countdown.

The iconoclastic former Jets and Bills coach appeared on the show on Super Bowl Sunday last month before going all-in with the World Wide Leader.

Ryan went 61-66 in his eight years as a head coach, including 7-8 with the Bills last year before being fired prior to the regular season finale.