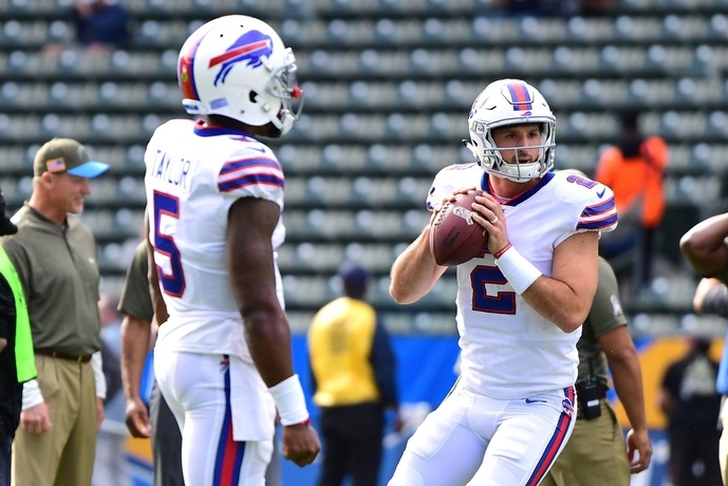 Week 11 of the NFL season is getting close to wrapping up, with only one game left between the Seattle Seahawks and Atlanta Falcons. If you enjoy watching Monday Night Football Here Is How To Watch It Online. There were plenty of big storylines but the three major rumors that will be discussed are President Donald Trump's comments on Marshawn Lynch, The Bills benching Tyrod Taylor for Nathan Peterman and Hue Jackson's decision with Deshone Kizer.

Trump Wants Lynch Suspended
President Trump is calling on the NFL to suspend Oakland Raiders running back Marshawn Lynch, who sat during America's National Anthem before Sunday’s game against the New England Patriots but stood for the Mexican national anthem, which was played because the game took place in Mexico City.

Trump Tweeted out early Monday morning his thoughts about Lynch kneeling for the National Anthem.

Marshawn Lynch of the NFL’s Oakland Raiders stands for the Mexican Anthem and sits down to boos for our National Anthem. Great disrespect! Next time NFL should suspend him for remainder of season. Attendance and ratings way down.

It is to note that Donald Trump made no comments on players who stood for “God Save the Queen” but took a knee for the National Anthem during games that took place in London.

Tyrod Taylor Benching Gone Wrong
The Buffalo Bills Head Coach Sean McDermott benched quarterback Tyrod Taylor for Nathan Peterman. After the Los Angeles Chargers intercepted Peterman five times and built a nice 37-7 lead, Peterman was pulled from the game. Once Taylor entered the game he threw for 158 yards, one passing touchdown and also had a rushing touchdown in one half of football.

Obviously, with a game like this, the Bills took some heat from players, teams, and the media. Seattle Seahawks cornerback Richard Sherman wasn't afraid to Tweet about the Bills benching Taylor.

So they bench my guy @TyrodTaylor and the guy they bring in has already thrown 2picks with 10mins left in the 1st. Great decision

After the game, McDermott talked to the media and didn't admit his mistake.

“I don’t regret my decision. I regret the result,” he said 20 minutes after his fading team took another robust punch to the gut, and quite a few blows to the face, in a 54-24 beatdown at the hands of the Los Angeles Chargers. “It wasn't what he or we hoped for, but young players experience things like this. You have to push through it.”

The Bills haven't announced a starter for Week 12 but it would be shocking if it wasn't Taylor.

Hue Jackson Going With Kizer
After a loss on Sunday, the Cleveland Browns drop to 0-10 and become only the third team in NFL history to have two straight 0-10 starts to season. After the game Browns coach Hue Jackson wasted no time declaring DeShone Kizer the starting quarterback for the rest of the season.

After that statement, he even said that Kizer would be the starter for the rest of the season. The Browns will likely have the first overall pick and will likely select a quarterback with their selection.