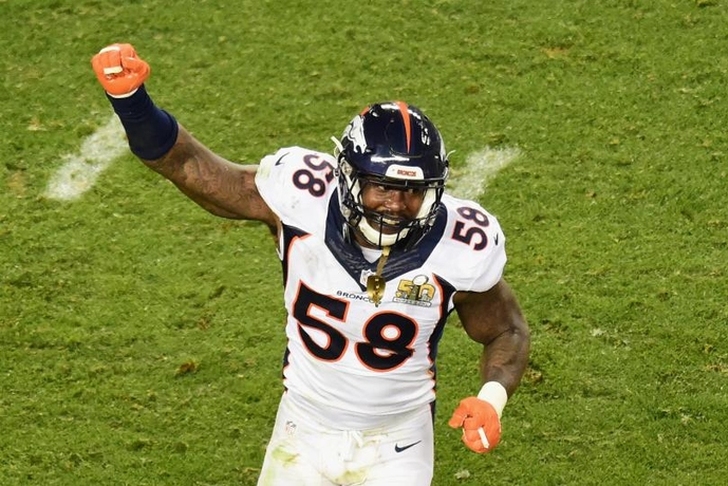 NFL teams are preparing for the start of training camps near the end of July, but the impending franchise tag deadline is on the minds of several organizations. If a team can't reach a long-term deal with players under the tag by 4 p.m. Friday, the players must sign their tender or sit out the season. Check out the latest NFL news and rumors below.

Latest On Von Miller
The Denver Broncos and OLB Von Miller have had some issues during contract negotiations. Jason Cole of Bleacher Report says Miller feels "disrespected" over the way talks have gone, especially early on. Meanwhile, Rand Getlin reports the LB's threats to sit out the season are "very real." There's also the development of no leaks coming from either side as of late, according to Mike Florio Pro Football Talk, which could be an indication that talks are currently off.

Neither team nor player have leaked anything since reports emerged over the weekend ... It’s unclear whether team and player agreed to stop talking or whether it just happened. It’s possible that, given Miller’s reaction to some of the tactics employed by the team in June, Miller’s camp has decided step back and watch the team dance on the edge of the cliff. Regardless, it's quiet.

The Broncos have until 4 p.m. Friday to work out a long-term deal. It will be up to Miller to decide if he wants to play and get paid next year, or stick with his threat of sitting out the season.

Eric Berry Contract Talks
The Chiefs used the franchise tag on safety Eric Berry this offseason, but it seems like the two sides won't reach a long-term agreement.

Absent a significant shift in the next two days, I’m told the #Chiefs and Eric Berry are unlikely to come to terms on a long-term deal.

The two sides still aren't close as of Thursday afternoon, although that could change tomorrow.

The 27-year-old safety came back from a battle with cancer to post arguably his best season last year. Berry likely wants a deal that surpasses the five-year, $51.25 million deal Harrison Smith landed with the Vikings this offseason.

No Deal For Trumaine Johnson?
Another player under the franchise tag is Rams CB Trumaine Johnson. However, Pro Football Talk reports the two sides likely won't reach a deal. They're still far apart on talks, and Johnson is set to make $13.9 million this year under the tag. A former third round pick, Johnson has made about $3 million in his career, and doesn't mind waiting to get some contract security since he's going to quadruple his earnings this year.

Supplemental Draft Results
The NFL Supplemental draft was today, and it came and went in all of 15 minutes.

Wow: All clubs have passed in all rounds of today's 1 pm supplemental draft. Draft now over.

First draft that ever was over before many knew it began. The 7 players in draft now eligible to be signed as free agents.

Six players were eligible this year: Calgary WR Rashaun Simonise, Purdue DT Ra'Zahn Howard, Virginia Tech long snapper Eddie D'Antuono, Ole Miss CB Tee Shepard, Sam Houston Street RB Jalen Overstreet and Concordia RB Cameron Walton. With none of the six being draft, they are all undrafted free agents and can sign with any team. No players were selected in the Supplemental Draft in 2013 and 2014 as well.

Bills RB Arrested For DWI
Jonathan Williams, a fifth round pick in this year's draft out of Arkansas, was arrested for driving while intoxicated Thursday morning. The police report says Williams had red eyes, slurred speech, poor balance and smelled of alcohol. Williams was arrested, although he said he only had a beer at 7 p.m. that night. He declined a breathalyzer test on the advice of his agent. The Bills have only said they are gathering information at the moment.