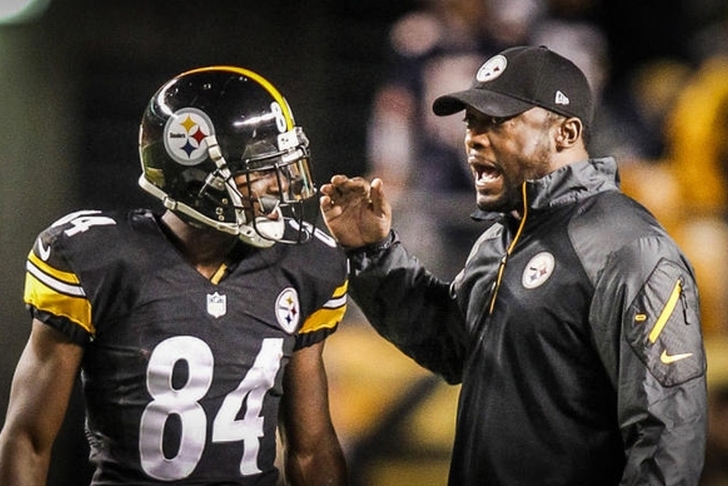 The NFL offseason is already in full swing for most teams with just the Super Bowl left on the schedule, and there is plenty of action going on around the league. All of the league's coaching vacancies have been filled with the San Francisco 49ers set to offer their job to Kyle Shanahan after the Super Bowl, and other teams are preparing for free agency and the draft. Check out the latest news on that & more in our NFL Rumors Roundup:

Steelers concerned about Brown
Wide receiver Antonio Brown has been one of the best receivers in the NFL for the past four years and one of the most reliable players on the team. However, Michael David Smith of ProFootballTalk cites an NFL Network report that the Pittsburgh Steelers are concerned that Brown is more obsessed with his stats instead of winning games:

The Steelers are also concerned that Brown is focused too much on his own personal statistics even at the Steelers’ expense, according to Aditi Kinkhabwala of NFL Network.

According to the report, after DeAngelo Williams scored the Steelers’ first touchdown in the AFC Championship Game, Brown was pouting while the rest of his teammates were celebrating because Brown wanted the ball to go to him, not Williams, on the play. And that’s not new: Last year, Steelers coach Mike Tomlin had to sit Brown down and tell him to stop chasing statistics, and that his only concern should be winning championships.

Brown is heading into the final year of his contract, and there’s been talk that the Steelers are planning to give him a raise on a new deal in the offseason. But if Brown really cares more about his stats than about winning, that may not be such a wise idea.

Brown had 106 catches for 1,284 yards and 12 touchdowns this season, his lowest number of receptions and receiving yards since 2012.

As much as the Chargers' move to Los Angeles angered San Diego, it angered NFL executives and owners just as much, if not more.

Since the move was announced, the NFL has been "besides itself," in the words of one league source. "There are a ton of owners very upset that [the Chargers] moved," one source said. The source added that the NFL wants the Chargers to move back, though nobody believes that possibility is realistic.

But some NFL owners and some league officials are still hoping, now that the move has been made official, that Chargers chairman Dean Spanos will wake up one morning soon, recognize this situation has been "bungled so bad," and take his team back to San Diego, where it spent the past 56 years. Again, the chances are at best remote that this happens.

If they stay in Los Angeles, the Chargers are set to share a new stadium with the Rams in two years. In the meantime, they will be playing their home games at StubHub Center, the 30,000-seat home of the MLS' Los Angeles Galaxy. Oakland Alameda Coliseum, current home of the Oakland Raiders (who may be moving to Las Vegas this offseason), is currently the smallest home to an NFL team with a capacity of 56,063 fans.

Watson avoiding Browns?
Clemson Tigers quarterback Deshaun Watson is one of three quarterbacks (along with UNC's Mitch Trubisky and Notre Dame's DeShone Kizer) that are expected to be drafted in the first round, but Watson is already trying to avoid being picked by a certain team. According to The MMQB's Peter King, Watson declined an invitation to the Senior Bowl - even though the Cleveland Browns talked to him about playing in the game.

Quarterback Deshaun Watson is skipping the Senior Bowl this week. Clemson’s Watson would logically have played for the South team, which will be coached by Hue Jackson and his Cleveland Browns assistants. If you’ve got faith in your ability, and you want to convince the coach of the team with the first pick in the draft—the team that desperately needs a quarterback and will almost certainly choose one high in the draft if it can’t trade for one or sign one before that—why would you not take the golden opportunity to work with Jackson for a week? The other two prime quarterbacks in the draft, Mitch Trubisky and DeShone Kizer, were not eligible, either because they weren’t seniors or because they hadn’t graduated. A couple of notes about the Watson miss, including a clarification I want to add from my post of this note Monday morning: I said the Browns talked to him and asked Watson to play this week. The Browns did talk to him, but the team says it did not urge Watson to play. In any case, Watson decided to not play.