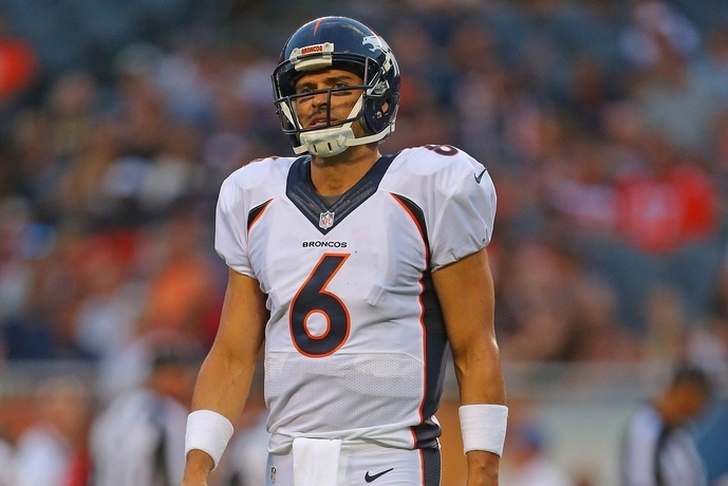 Week 3 of the NFL preseason wrapped up on Sunday night, and teams are making their first round of cuts to trim their 90-man rosters down to 75 ahead of today's 4:00 pm ET deadline. Because of that, there is plenty of buzz circulating around the league. Check out the latest NFL news and rumors below.

Cowboys to sign Sanchez?
After naming Trevor Siemian their starting quarterback, the Denver Broncos are looking to trade Mark Sanchez - and have specifically contacted the Dallas Cowboys about a deal, according to Jane Slater of NFL Network:

Denver has contacted Dallas about a trade for Mark Sanchez. The Cowboys are not interested in a trade if it involves his current salary.

Sanchez is on the books for $4.5 million this season, which is a lot to pay someone who will likely be a backup quarterback no matter where he does.

However, the Cowboys are still interested in him - they just don't want to trade for him. The Broncos plan to cut Sanchez if they can't trade team, meaning a team could sign him for less. Dallas has expressed a lot of interest in him once he becomes a free agent, looking for him to backup rookie Dak Prescott after Tony Romo's back injury.

Saints, Chiefs interested in Kruger
The Cleveland Browns shocked many when they released linebacker/defensive end Paul Kruger, but the veteran pass rusher didn't have to wait long for other options. According to ESPN's Mike Triplett, Kruger will visit with the New Orleans Saints and Kansas City Chiefs this week:

The veteran pass-rusher is scheduled to visit the New Orleans Saints on Tuesday, according to a league source. He then will visit the Kansas City Chiefs, a source told ESPN's Adam Schefter.

It's a logical move for the Saints, considering they made a strong push to sign Kruger back in 2013, before he signed his five-year, $40.5 million contract with the Browns. Saints coach Sean Payton labeled the pass rush "very concerning" after his team's preseason loss to the Pittsburgh Steelers on Friday.

The Saints traded a conditional seventh-round pick to the Miami Dolphins for backup pass-rusher Chris McCain on Monday.

Kruger, 30, became expendable in Cleveland because the Browns are in long-term rebuilding mode, and he was slated for more of a part-time role in 2016 under a new coaching staff. The 6-foot-4, 270-pounder had a solid three-year run in Cleveland, but it wasn't as dynamic as his contract suggested. He had 4.5 sacks in 2013, 11 in 2014 and 2.5 in 2015, with his numbers suffering from his move from the strong side to the weak side.

Kruger had just 27 tackles with 2.5 sacks last season, and criticized the Browns for the way they used him. In 2014, he racked up 53 tackles with 11 sacks and four forced fumbles.

Redskins, Bucs to play tomorrow
The Washington Redskins and Tampa Bay Buccaneers were scheduled to play their preseason finale on Thursday night, but the Bucs announced that the threat of inclement weather has forced them to move the game to Wednesday night:

This week’s preseason game between the Tampa Bay Buccaneers and Washington Redskins at Raymond James Stadium has been moved to Wednesday, August 31, at 8:00 p.m. ET. The change from the originally scheduled date of Thursday, September 1, is in an effort to avoid anticipated severe weather from Tropical Depression Nine which is expected to impact the Tampa Bay area.

“We have been in regular communication with administrators from the Tampa Sports Authority, Hillsborough County, the City of Tampa and the National Weather Service over the past day as it has become apparent that the most severe weather associated with Tropical Depression Nine will likely make landfall on Thursday,” said Buccaneers Chief Operating Officer Brian Ford. “This decision was made by both teams in conjunction with the National Football League and local authorities in an effort to ensure the safety of our fans, players and stadium staff.”

Both teams are 2-1 in the preseason.