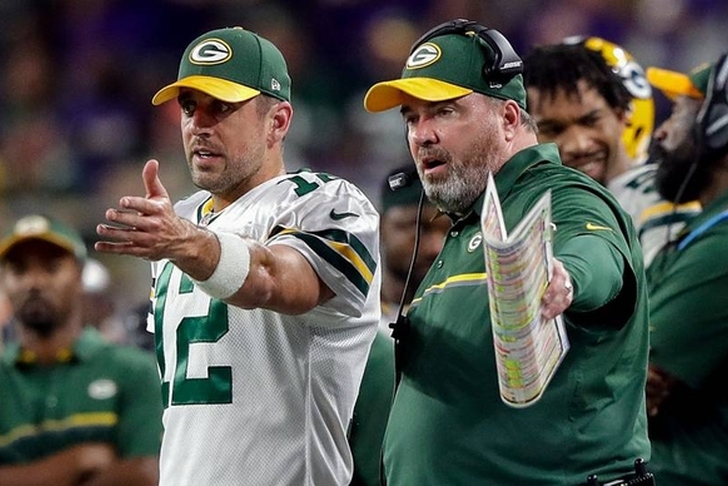 Week 10 of the NFL season wraps up tonight with the New York Giants hosting the Cincinnati Bengals on Monday Night Football. As with many Mondays, there are plenty injury updates to detail, but here are also several rumors floating around the league, including some trouble with the Packers. Here are all the latest NFL news & rumors you need to know.

Report: Rodgers-McCarthy relationship close to imploding
There has been some very obvious public discord among the Green Bay Packers during their less-than-impressive 4-5 start, particularly among quarterback Aaron Rodgers and head coach Mike McCarthy. However, there may be more going on behind the scenes. According to ProFootballTalk's Mike Florio, the relationship between the two is close to an implosion - which will lead to McCarthy getting fired:

Regardless of whether it dates back to the decision of the 49ers not to draft Aaron Rodgers when Mike McCarthy served as offensive coordinator there or whether it has popped up in the struggles since last year’s 6-0 start or whether at some point the quarterback said something that got and stayed under the coach’s skin or at some point the coach said something that got and stayed under the quarterback’s skin, the relationship is dangerously close to exploding or imploding or otherwise -ploding in a way that results in one of them being sent packing.

And it won’t be the quarterback.

Rodgers has been engaged in a passive-aggressive attack on McCarthy in recent days, and if the goal is to rattle McCarthy, it’s working. After an ugly home loss to the Colts, Rodgers declared that the sideline lacked energy, a shot at the man ultimately responsible for ensuring that the players are ready to play. McCarthy said the next day that he thought the energy was “pretty good.” More recently, Rodgers took more clear aim at McCarthy after an embarrassing loss to a team that in past years was hard pressed to score 47 in a month, suggesting that the coach doesn’t instill the proper amount of it’s-not-personal-it’s-just-business fear in players that, at some point, failure will get them fired.

The Packers currently sit in third in the NFC North, trailing both the Detroit Lions and Minnesota Vikings.

"It's not a great place," Carroll told the "Brock and Salk" show. "They weren't nuts. It's because they're so used to winning. There was a time when they kicked their last field goal to go ahead, and it was like a round of applause for the nice effort. Gosh, our guys would be going berserk. We're so hungry for it. It's a gorgeous setting, beautiful arena and the fans, just the whole thing. It's really classy."

Carroll does have history with the franchise, serving as the head coach of the Patriots from 1997-1999 before being fired and replaced by Bill Belichick.

Thomas Rawls to play this weekend
In other Seahawks news, Carroll said they will get star running back Thomas Rawls back for Sunday's game against the Philadelphia Eagles:

Pete Carroll on @710ESPNSeattle: "Thomas [Rawls] is ready to go. He's going to practice to play this week."

Rawls hasn't played since suffering a fibula injury in Week 2. As a rookie last year, Rawls ran for 830 yards and four touchdowns on 147 carries.