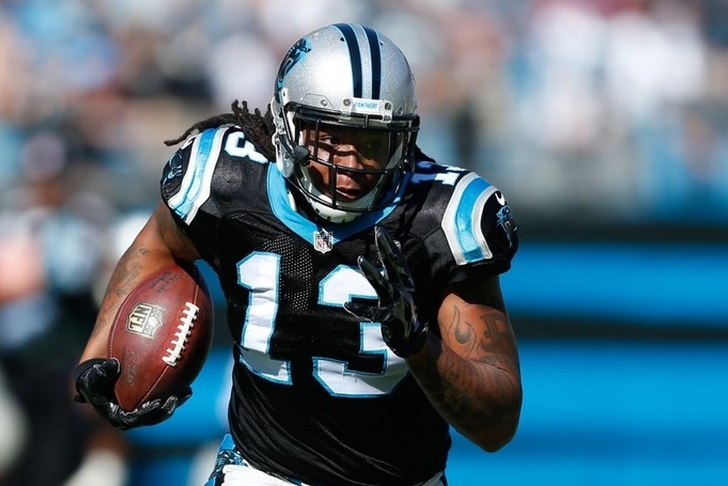 Panthers deny Kelvin Benjamin is 280 lbs.
Carolina Panthers wide receiver Kelvin Benjamin has a history of weight issues that have plagued him since his freshman season at Florida State, and they appear to be showing up again. Head coach Ron Rivera admitted that Benjamin is overweight, but vehemently denied a report that said he was 280 pounds. Via Joseph Person of the Charlotte Observer:

The Panthers list the 6-5 Benjamin at 245 pounds, although his playing weight has been as high as 252 pounds, according to a team source.

Rivera didn’t say what Benjamin’s current weight is, but said a broadcast report that put Benjamin at close to 280 pounds was wrong.

“He is a little heavy. He knows it. We’ve talked about it. We talked about what he has to do, and he’s done a great job,” Rivera said Saturday.

“Am I concerned? Yes, because he is heavy. I’m going to admit that right now,” Rivera added. “But is he working hard? Absolutely. He’s been there everyday and done the things we’ve asked him to do, and it’s all strictly on a voluntary basis.”

Benjamin had 63 catches for 941 yards and seven touchdowns last season.

49ers nearly took Reuben Foster with No. 3 overall pick
The San Francisco 49ers were widely praised for their work in the NFL Draft, particularly in the first round. They drafted Stanford defensive end Solomon Thomas with the No. 3 pick and traded to get Alabama linebacker Reuben Foster with the No. 31 pick, but according to Peter King of TheMMQB.com, the 49ers were ready to take Foster at No. 3 if Thomas was off the board.

They debated, and made sure that if they couldn’t find a trading partner to move down from three, they were comfortable taking Foster—with a questionable shoulder and a positive combine test for a diluted drug sample—with the third overall pick, if the Bears took Solomon. But they wanted to try to move down as far as No. 8 because they felt Foster had no chance of being selected before Cincinnati at No. 9.

San Francisco traded from No. 2 to No. 3 to acquire more picks, and thought the Bears were going to take Thomas with that No. 2 pick. Instead, they drafted Mitchell Trubisky and Foster fell due to off-field concerns.

The 49ers had tried to trade up several other times in the draft to pick Foster, but weren't able to reach an agreement until they got the No. 31 pick from the Seahawks.

Foster had 115 tackles with 13 tackles for loss and five sacks in 15 games last season.

Jaguars pick up 2018 option on Blake Bortles
After much debate about his future with the franchise this offseason, the Jacksonville Jaguars announced on their website that they have picked up the 2018 club option on quarterback Blake Bortles' contract.

“This is a smart business decision for the team for several reasons,” said Jaguars Executive Vice President of Football Operations Tom Coughlin. “It makes sense for us going forward and it’s good for Blake and for the Jaguars.”

Bortles threw for 3,905 yards with 23 touchdowns and 16 interceptions last season.