NFL Rumors Roundup: Owner Says This Is "The Year" For Browns, Beckham To Report Thursday & More 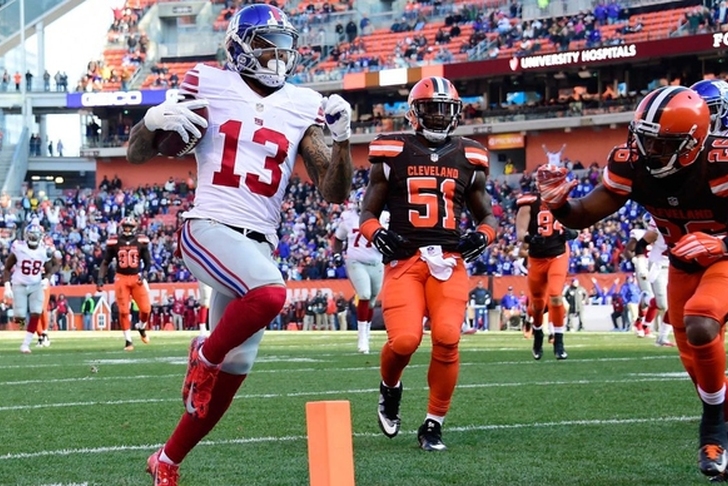 The NFL offseason is in a bit of lull, even though OTAs are now underway for a few teams. However, there are still a few notable free agents left on the market and several notable news coming out of OTAs. Here are all the latest NFL rumors you need to know.

Browns owner says this is "the year" for improvement
The Cleveland Browns won one game last season and are projected to win the fewest games in the NFL again this season, but those around the team are more optimistic. Team owner Jimmy Haslam said that he thinks this is year the franchise starts to turn things around:

"The difference between this year and last year in terms of feeling in the building is noticeably different," Haslam said, via the Akron Beacon Journal. "We were able to obviously to bring in some top-flight talent during the offseason, have what we believe to be a very successful draft and I'm highly confident that this will be the year when the Browns begin to turn around and perform at the level they should. I'm highly, highly confident we got the right guy to lead the ship, and that's head coach Hue Jackson."

For his part, Jackson said that he also feels more confident about the Browns this year because of the foundation they set in 2016.

"I don't even want to talk about last year, what [foundation] was set, because a lot of stuff wasn't set," Jackson said. "I do feel better about [this year]. Our draft shows that we've put more quality talent on our team. I think it showed last year that our guys understood our process, and they worked hard. We just couldn't seem to win because of it.

"Now, hopefully we have enough talent to where we can finish games and finish games better and finishing hopefully leads to winning. But at the end of day, all of this is about winning. It's not about anything else. We need to see tangible wins in order for this organization to be moving forward."

Vegas has Cleveland's over/under win total at four games for the upcoming season.

Brock Osweiler to be Cleveland's No. 3 quarterback?
The biggest reason why the Browns haven't been able to be successful for the last several years is because of terrible quarterback play, and they enter 2017 with more uncertainty at the position.

Jackson has already said that Cody Kessler will likely be the team's starter despite the team trading for Brock Osweiler, and now, Osweiler might not even be the backup. According to Conor Orr of NFL.com, Osweiler will likely be Cleveland's third-string quarterback behind rookie DeShone Kizer.

Kizer is Jackson's first real chance to attach his name to a quarterback with long-term starter potential since Joe Flacco (Jackson was the Ravens' quarterbacks coach in 2008 and 2009). While he did fantastic work with Andy Dalton in Cincinnati, this is a ground-up project that energizes coaches like Jackson, who enjoy the quarterback whisperer title.

Does that leave Osweiler as the Browns' third-string quarterback? They could always be holding on to the former second-round pick with the hope they can flip him for a draft asset late in the summer. But what happens if there is an unusually clean training camp for the league's premier passers?

The Browns could obviously let him go. The plan was to absorb the mammoth salary-cap hit anyway and pocket the second-round pick. But is it safe to wonder if they thought Osweiler would be gone via trade already?

Cleveland absorbed Osweiler's contract in order to get the draft picks from the Texans, which is what they really wanted. Osweiler finished 2016 with 2,957 passing yards, 15 touchdowns and 16 interceptions while completing just 59 percent of his passes.

Wide receiver Odell Beckham Jr. was not in attendance for the first of the New York Giants' organized team activities on Monday.

Beckham worked out with his trainer on Monday in California, according to posts by the trainer on Instagram, and is likely to be at OTAs on Thursday, sources told ESPN's Jordan Raanan.

The OTAs are voluntary, and Beckham does not have language in his contract that gives bonuses for attending offseason workouts, as many players do.

He did not attend Eli Manning's annual passing camp at Duke last month and told Newsday that he was undergoing oral surgery that week.