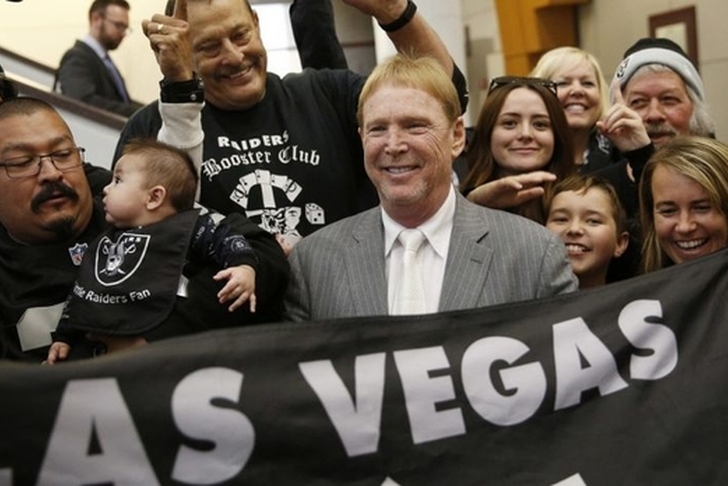 No opposition to Raiders' Vegas move
The NFL owners will vote on the Oakland Raiders' bid to relocate to Las Vegas in the coming week, and according to NFL.com's Judy Battista, the move is expected to be approved as there isn't a lot of opposition to it.

With a vote of NFL owners slated for Monday at the Annual League Meeting, the Oakland Raiders are expected to receive approval to relocate to a stadium to be built in Las Vegas.

The potential move by the Raiders is expected to dominate the meeting of owners, coaches and general managers, which begins Sunday in Phoenix. If 24 of the 32 clubs agree -- they almost certainly will, although reluctantly -- the Raiders will play two more years, the 2017 and 2018 seasons, in Oakland before packing up. They would have to play an additional season in an interim stadium -- the league has already looked into which adjustments would be needed to make the University of Nevada, Las Vegas's stadium a viable host for NFL games -- before the new stadium is completed.

"I think in the end there will be a vote and I think it will pass," one team owner said. "I haven't had people lobbying me, so I don't know if [opposition] is out there, but I don't see it."

The final step in the Raiders' relocation process will be receiving the approval of the league's owners (24 of 32 needed to approve the move). That vote will take place during the annual league meeting on March 26-29.

Bears interested in DeShone Kizer
The Chicago Bears signed Mike Glennon to a three-year deal at the start of free agency, but they are still interested in the possibility of adding a quarterback through the draft. According to Brad Biggs of the Chicago Tribune, the Bears have a lot of interest in Notre Dame's DeShone Kizer.

Kizer passed for 2,925 yards with 26 touchdowns and nine interceptions while rushing for 472 yards and eight more touchdowns.

FA QB Johnny Manziel has kept a low-profile as he trains for a return. #Saints coach Sean Payton appears to have taken an interest in him.

The #Saints still need a backup QB. Payton could make the most of Manziel’s talent. Drew Brees would be a perfect mentor. A lot makes sense.

Manziel missed the entire 2015 season after being released by the Cleveland Browns, and held a workout for the CFL's Saskatchewan Roughriders last month.