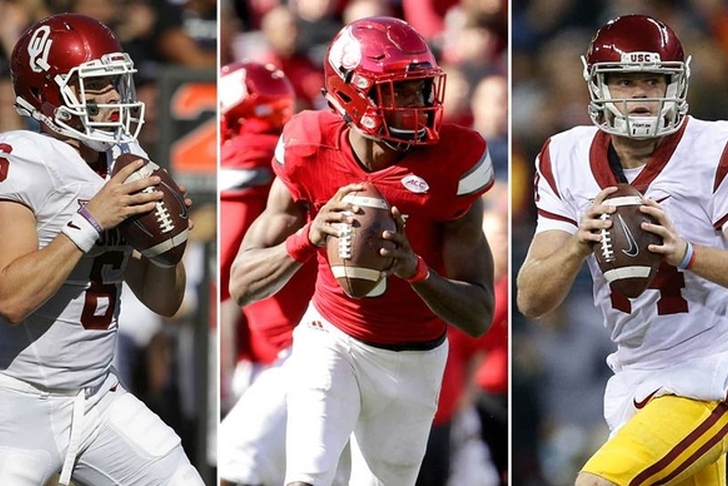 The 2018 NFL Combine started on Tuesday and will end March 5th. Most of the attention on the 2018 NFL Draft and basically every draft is on the quarterbacks. With recent success with top quarterback prospects like Los Angeles Rams' Jared Goff, Philadelphia Eagles' Carson Wentz, and Houston Texans' Deshaun Watson, the quarterbacks this offseason have been under a microscope. For quarterbacks size matters, every inch and today three top prospects measured in at the NFL Combine. Here is what Baker Mayfield, Lamar Jackson, and Sam Darnold measured in at:

Baker Mayfield NFL Combine Measurements
Oklahoma Sooners quarterback Baker Mayfield is fresh off a prolific college football career, including a Heisman Trophy this season. But how does Mayfield look as an NFL Draft prospect?

According to NFL Network's Daniel Jeremiah reported, Mayfield measured 6-foot 5/8 and 215 pounds at the NFL Scouting Combine. His hands measured 9 1/4 inches, just in line with the typical NFL threshold. Mayfield has been compared to Saints quarterback Drew Brees and his measurements are better than Brees who measured in at 6-foot 3/8 and 213 pounds.

Lamar Jackson NFL Combine Measurements
Louisville Cardinals quarterback Lamar Jackson's athleticism is an obvious upside, along with his cannon for an arm. Jackson has been inconsistent with his accuracy, footwork, and reading defenses. There are differing opinions surrounding the 2016 Heisman trophy winner, some scouts compare him to quarterback Michael Vick, but others say he should convert to a wide receiver. But how does Jackson look as an NFL Draft prospect?

Daniel Jeremiah reported that Jackson measured 6-foot-2 1/4 and 216 pounds at the NFL Scouting Combine, which is actually shorter than what he was listed at Louisville. Jackson's hands are 9 1/2 inches, but eyes will be on Jackson who is expected to light up the combine.

Sam Darnold NFL Combine Measurements
USC quarterback Sam Darnold is one of the most talked about players this offseason as a potential first overall pick in the draft. While Darnold is incredibly raw, he will likely be one of the top players selected in the 2018 NFL Draft. But how does Darnold look as an NFL Draft prospect?

Darnold measured in at 6-foot-3 3/8 and 221 pounds at the NFL Scouting Combine. Darnold's hands are 9 3/8-inch clearly passing the hand size threshold. Scouts were worried he had small hands due to his tendency to fumble in college.