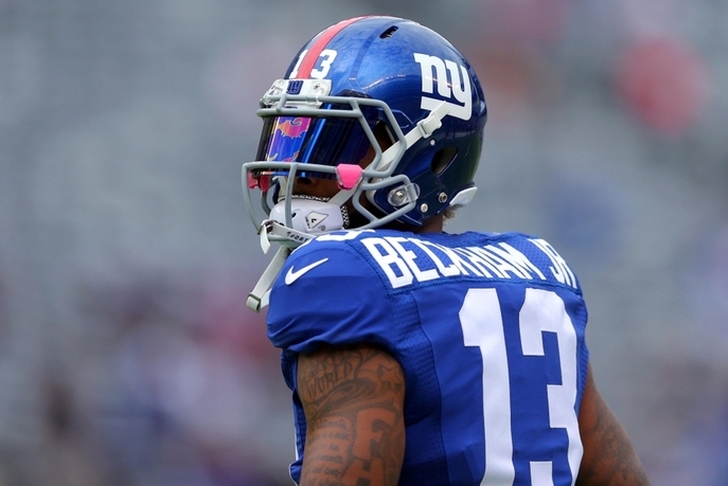 The 2016 NFL season is in full swing, and Week 7 kicks off tonight with the Packers hosting the Bears. The season is still nearing its halfway point, and as a result, injuries are piling up for several teams throughout the league. From signings to ongoing position battles, here is everything you need to know from around the league:

Beckham out for Sunday?
New York Giants wide receiver Odell Beckham Jr. is coming off his best game of the season, but his status for Sunday's game against the Rams in London is up in the air, reports Marc Sessler of NFL.com:

The Giants practiced Thursday without Odell Beckham for a second consecutive day.

The star wide receiver had sat out Wednesday's session after tweaking his left hip in the first half of Sunday's win over the Baltimore Ravens. Giants coach Ben McAdoo said Wednesday Beckham is still feeling sore and that he is considered day-to-day.

Beckham has 35 catches for 581 yards and three touchdowns this season, two of which came last weekend against the Ravens.

Play casino games online with Borgata. Sign up now for a 100% bonus match.

McCoy also out?
LeSean McCoy has helped spark the Buffalo Bills' current four-game winning streak, but he may miss Sunday's game after suffering a hamstring strain in practice on Wednesday, according to Sal Capaccio of WGR 550:

A source with knowledge of the situation says Bills running back LeSean McCoy suffered a “mild to moderate” hamstring strain Wednesday at practice and that the team is still hoping to have him available Sunday at Miami, but his status will most likely remain uncertain for at least the next couple of days.

Head coach Rex Ryan told the media that McCoy left practice early with “tightness” in his hamstring, but was unable to give further details on the injury.

“We’ll see what happens with our medical evaluation,” Ryan said. “I’m not going to look into it, but we’ll see how he comes back. We feel good about the guys we do have, but that’s assuming he won’t play, so we’ll see how it goes.”

McCoy is currently the NFL's second-leading rusher with 587 rushing yards.

Flacco determined to play
Baltimore Ravens quarterback Joe Flacco has not practiced this week with a shoulder injury, but he told the team's website that he will play this weekend.

“It’s nothing to worry about,” Flacco said, via the team’s website. “I have a little shoulder soreness, so I just thought it was best to take the day off and come back and see how it feels tomorrow.”

Flacco has passed for 1,589 yards and five touchdowns with four interceptions so far this season.

Fuller to play Monday
Rookie wide receiver Will Fuller has emerged as the Texans' No. 2 receiver, but missed last weekend's win over the Colts with a leg injury. That injury isn't expected to keep him out any longer, as he returned to practice and told reporters he will play Monday against the Broncos.

"I felt good out there," Fuller said. "I was running routes. I'm ready to go."

Fuller has 20 catches for 327 yards and two touchdowns this season, and has also returned a punt for a touchdown.