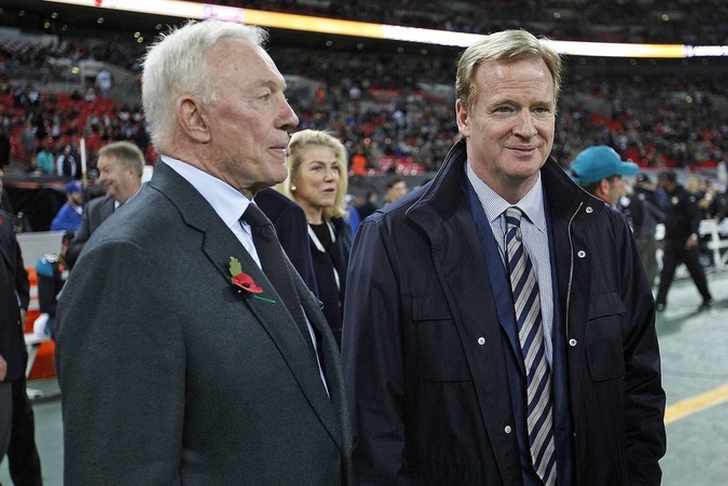 Jerry Jones "Laughable"
A Pro Football Talk report came out and said several NFL owners were discussing removing Jerry Jones as the owner of the Dallas Cowboys. The reason for the discussion streams down from his dispute concerning a contract extension for NFL commissioner Roger Goodell. On Tuesday, Jones appeared on 105.3 The Fan and said:

"I've had not one inkling of communication from the league office or any owner that would suggest something that laughable, ridiculous, and that's about where that is."

Jones did not back down from his stance against suing Roger Goodell if he is granted an extension. Goodell is up for a contract extension in 18 months and Jones wants to "slow that train down."

Ben McAdoo Firing Coming?
The Giants are now 1-8 following a 31-21 loss to the previously winless 49ers. McAdoo has lost the locker room but according to NFL Network's Ian Rapoport, the Giants owners still want him as their coach.

The Giants will continue to suffer this season and as soon as the season is over they will take action which will mean the firing of Ben McAdoo.

Drew Brees Future With Saints
The Saints have won seven games in a row and it's because of the consistent play of quarterback Drew Brees combined with a great running game led by Mark Ingram and Alvin Kamara. Brees is in the final year of his contract but in an interview with XTRA 1360 AM Brees said the following:

“I feel like we’ve got a great opportunity ahead of us and I don’t plan on leaving New Orleans ever,” Brees said. “Hopefully, I know all of that stuff takes care of itself when it’s supposed to. I have not approached them about any contract. We just have a great understanding here. Listen, we’re going to go through this season and we’ll revisit it in the offseason. For right now, I’m in the moment.”

He made it very clear that he wants to remain a Saint for life and the Saints are trending in the right direction in keeping their franchise quarterback who will turn 39.

If you want to hear more about these rumors, luckily for you Tom Downey and Mitchell Renz talk about NFL rumors and much more on The Fantasy Football Rumors Podcast.