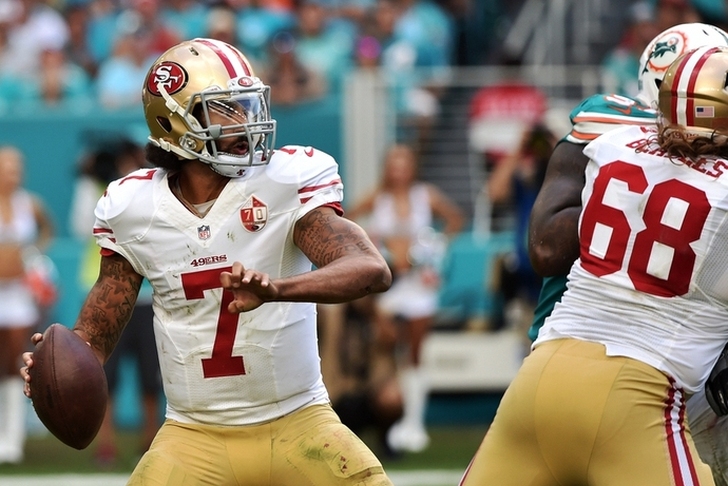 Week 13 of the NFL season is set to conclude tonight with the New York Jets playing host to the Indianapolis Colts. Now that we're in the final month of the season, many teams are dealing with injuries, and some are looking ahead to the offseason. Here are all the latest news and rumors from around the league:

Kaepernick may re-sign with 49ers
When San Francisco 49ers quarterback Colin Kaepernick restructured his contract, allowing him to become a free agent after the season, many took that as a sign that his time with the team was limited. However, according to NFL Network's Ian Rapoport, Kaepernick still plans to opt out - but there's a good chance he re-signs with them:

It would not be a surprise if Kaepernick was the team's starting quarterback in 2017, sources said. There is still a chance he re-signs with San Francisco this offseason, and it's certainly not something to rule out like it once was.

Kaepernick will, in fact, void his contract before the league year and become a free agent, sources said. This creates a scenario where Kaepernick can test the market, sign a contract that gives him much greater peace of mind, and still end up back with the Niners.

Some factors are at play. First, he's playing great, becoming the quarterback coach Chip Kelly always imagined in his system (even during his time in Philadelphia). Second, the once-strained relationship between the franchise and the quarterback is in a very good place.

The 49ers stood by him while he took a hard social stance -- he appreciated that, and most of the issues that lingered when he nearly was traded to the Broncos have dissipated. Things are good between Kaepernick and the team, and his decision to put his San Jose house on the market this week had nothing to do with football.

Kaepernick has started eight games for the 49ers this season, throwing for 1,444 yards and 10 touchdowns with just three interceptions to go along with rushing for 393 yards and another score.

#Patriots WR Danny Amendola suffered a high-ankle sprain in the win vs #Rams, source said. Plan is to make sure he's ready for the playoffs.

That's a good sign for New England's offense, who is already without All-Pro tight end Rob Gronkowski for the remainder of the season. Amendola has caught 23 passes for 243 yards and four touchdowns this season.

Mike Zimmer returns to Vikings, will coach vs. Jaguars
Minnesota Vikings head coach Mike Zimmer missed the team's loss to the Dallas Cowboys on Thursday after having emergency eye surgery, but the team announced he has returned and will coach the team on Sunday against the Jacksonville Jaguars:

Coach Zimmer has returned to his coaching duties and is expected to travel with the team to Jacksonville.

Follow our NFL news page for all the latest NFL news & rumors!