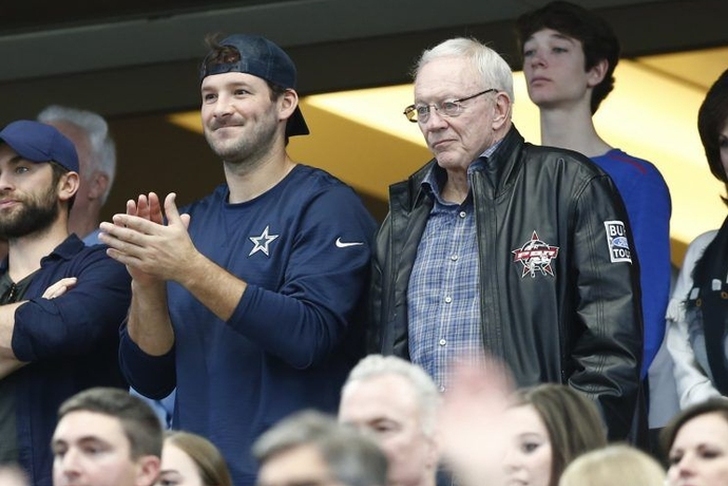 Jerry Jones blocking Tony Romo to Texans?
The Houston Texans have emerged as the favorite to land Tony Romo if the Dallas Cowboys release him, which is what owner Jerry Jones wants to avoid, writes ProFootballTalk's Mike Florio.

From the moment the news emerged that Romo would be released (the post-hoc spin is that he was only told he won’t be on the roster in 2017), the reaction among the Dallas media was swift and intense and it became clear that the release wouldn’t be the end of a new era of Romo-centric coverage in the Dallas area but the beginning.

Couldn’t his concerns be handled via the wink-nod “do-right” approach that the team and the player are supposed to be adopting? This would require Jones to ask Romo not to play for the Texans. And there’s a good chance that request eventually would make its way to the media. Which would prove that Jones is worried about a Houston uprising diluting Dallas interest in the Cowboys.

For Jones, creating the impression that he actually cares about the Texans becoming more popular in Dallas and more successful overall could be worse than either thing happening. So he has instead squatted on Romo, waiting for a trade offer that may never materialize, and perhaps hoping an offer never comes from Houston.

I’ve believed for the last week that Jones hopes an offer will be made to him at the upcoming league meetings in Arizona. The truth could be that Jones plans in Phoenix to make a team like the Broncos a low-ball, face-saving offer that gets the Cowboys some marginal value for Romo — and that ensures he’ll never play for the Houston Texans.

Seahawks open to trading Marshawn Lynch
Marshawn Lynch didn't play last year after retiring, but the Oakland Raiders are interested in talking him into coming back and playing for them. However, since the Seattle Seahawks still hold Lynch's rights, the Raiders would have to trade for him - and the Seahawks are willing to listen, according to NFL.com.

Whereas future Hall of Famer DeMarcus Ware, for example, was a free agent when he decided to hang up his cleats earlier this week, Lynch retired one season into a two-year, $24 million contract extension signed in March of 2015. If he wants to scratch the itch to play again, he would remain under contract with Seattle.

The Seahawks would be willing to trade the 30-year-old power back for the right price, Garafolo confirmed, but they had no intention of releasing him without compensation when the subject was broached last year.

As NFL Network Insider Ian Rapoport noted Friday morning, there is no indication that the Raiders have reached out to the Seahawks about the possibility of acquiring Lynch's rights.

Panthers taking calls for Tre Boston
The Carolina Panthers are listening to offers for safety Tre Boston, according to Bill Voth of the Black & Blue Report.

After already giving up on their second-round pick of the 2014 draft, the Carolina Panthers could be tempted to do the same with their fourth.

According to multiple sources, at least one team has recently called looking to acquire safety Tre Boston. To be clear, the Panthers aren’t shopping Boston. But it’s reasonable to assume they’re willing to listen to possible offers.

Heading into free agency, the Panthers made landing a veteran safety a priority. Not only are they unconvinced Boston can be consistent enough to hold onto a starting job, but they also want to slide Kurt Coleman back to free safety, where he snagged seven interceptions in 2015.

Boston had 53 tackles with two sacks and two interceptions in 15 games last season.

Follow our NFL news page for all the latest NFL rumors!