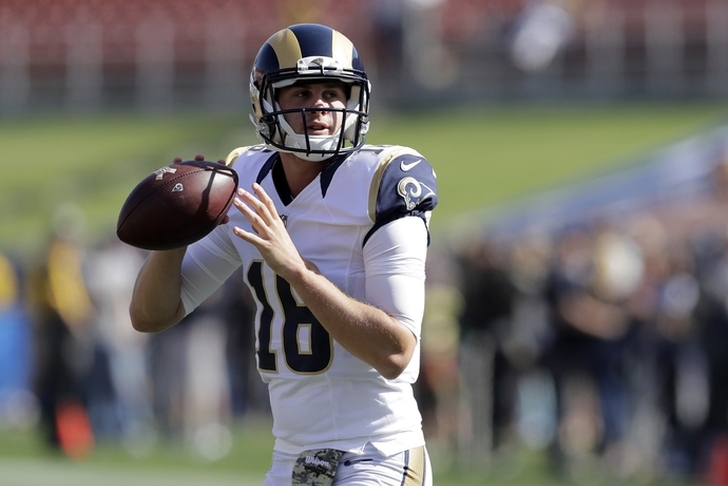 Week 10 closed with the New York Giants picking up their fourth-straight victory with a 21-20 win over the Cincinnati Bengals on Monday Night Football. Now that we're in the second half of the season, injuries are starting to pile up for several teams, and one team is making a big change. Here are all the latest news and rumors you need to know:

Goff to start for Rams
No. 1 pick Jared Goff is finally set to make his NFL debut, making his first career start for the Los Angeles Rams on Sunday against the Miami Dolphins, according to ESPN's Chris Mortensen:

Jared Goff will start Sunday for the @RamsNFL against @MiamiDolphins in front of a home crowd, per team sources. QBs were informed this am.

Goff has yet to take a single snap in the regular season after backing up Case Keenum for the first nine games of the year. he went 22-of-49 for 232 yards, two touchdowns and two interceptions in the preseason.

Gronkowski may have punctured lung
New England Patriots tight end Rob Gronkowski suffered what the team believes is a punctured lung in their loss to the Seattle Seahawks on Sunday, reports ESPN's Ian Rapoport:

Sources: #Patriots TE Rob Gronkowski suffered what is believed to be a punctured lung on Sunday vs. #Seahawks. But could miss just one game.

#Patriots TE Rob Gronkowski's toughness would never be questioned. But finishing a game with a punctured lung is something else.

Gronkowski is only expected to miss one game with the injury. He has caught 25 passes for 540 yards and three touchdowns in seven games so far this season.

Heyward to miss rest of season
Pittsburgh Steelers defensive end Cameron Heyward announced on Instagram that he will miss the rest of the season after suffering a torn pectoral muscle:

I would like to thank everyone who has been in my corner this season. It pains me to say that I will not get to continue playing this season. My role will change as I can not play but it will not change the goals the team has set out. My support for this team will only grow and I look forward in watching this team grow and fight on. Hate being on the sideline but there is a greater plan taking place. My patience will be tested but I look forward to 2017. My hand will remain in the pile no matter what!

Heyward finishes the season with 21 tackles, three sacks and one forced fumble.