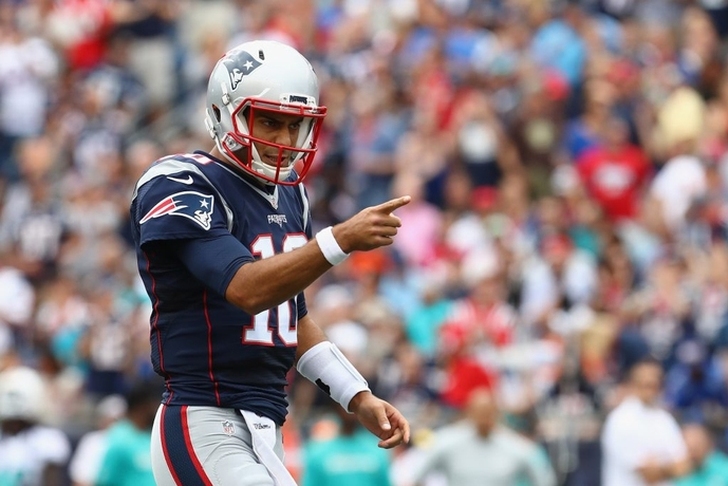 The Cincinnati Bengals moved to 2-2 on the season with a 22-7 win over the Miami Dolphins on Thursday night, and there's plenty of buzz circling around the league ahead of the rest of this weekend's games. The injury bug has already hit several teams hard, and teams are scrambling to find ways to replace those injured players. Check out the latest NFL news and rumors below.

Garoppolo to start for Patriots
After missing last week's game against the Texans, New England Patriots quarterback Jimmy Garoppolo will start on Sunday against the Bills, according to WEEI:

According to WEEI’s Kirk Minihane, Patriots quarterback Jimmy Garoppolo will start Sunday against the Bills.

Garoppolo suffered a reported sprained AC joint in his right shoulder the second quarter of the Week 2 win over the Dolphins, but didn’t play last week against the Texans. Sunday would be two weeks from suffering the injury.

The quarterback was limited in practice all week and officially listed as questionable. Last week, he was listed as doubtful.

Garoppolo has passed for 496 yards and four touchdowns with no interceptions in two starts this season.

Giants work out Whitner
The New York Giants are dealing with injuries to several safeties (Mykkele Thompson on injured reserve with Nat Berhe and Darian Thompson both out Monday night’s game), so they are bringing in former Pro Bowl safety Donte Whitner in for a workout, reports NFL Network's Ian Rapoport.

Battling injuries at safety, playing WRs there in practice, the #Giants are working out ex-Pro Bowler Donte Whitner on Sunday, source said.

Whitner had 81 tackles with 1.5 sacks and one forced fumble last season with the Browns, who released him in April.

Baldwin receiving death threats
Seattle Seahawks wide receiver Doug Baldwin demanded in a press conference last week at attorney generals in all 50 states review their policies on training police offers, and he revealed on 60 Minutes Sports that he has received death threats because of it:

"I had a few," Baldwin said. "A couple of people told me to watch my back. If something was to happen to me, I think that would just further prove my point that there are issues in our culture, in our society that need to be changed."

Baldwin, whose father is a police officer, went further to clarify his comments.

"Now this is not an indictment of our law enforcement agencies. I just want that to be clear. We know that there's a select few -- a very minute few -- of law enforcement who are not abiding by those laws and policies."

Baldwin has 20 catches for 276 yards and two touchdowns so far this season.

"However, we also know that there are laws and policies that are in place that are not correcting the issue that we have in our society right now."