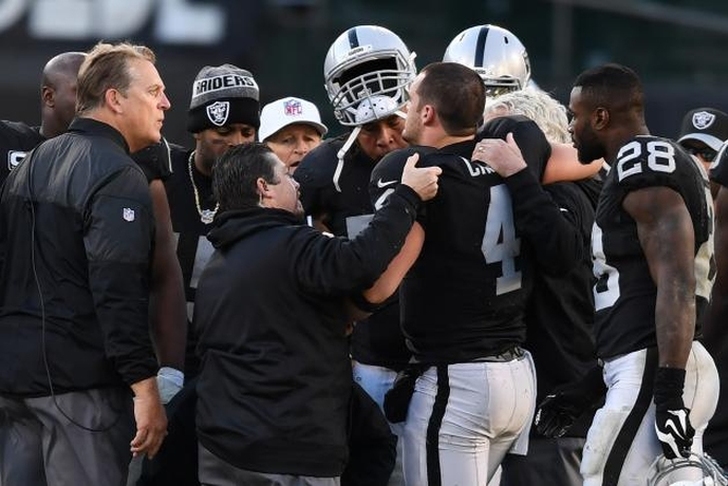 The Dallas Cowboys and Detroit Lions are set to close Week 16 of the NFL season tonight, and with just one week left in the regular season, teams are either making preparations for the playoffs or for the offseason. As such, plenty of news and rumors are flying around the league. Here's all the latest you need to know:

Carr injury timeline set
Oakland Raiders quarterback Derek Carr suffered a fractured fibula in the team's win over the Colts on Saturday, and no timeline was originally set for his recovery. Now, Carr will have surgery on Tuesday and will be sidelined for 6-8 weeks, according to ESPN's Adam Schefter.

The Raiders will clinch the No. 2 seed in the AFC with a win on Sunday. However, even if Oakland made the Super Bowl, Schefter's timeline would mean that Carr still wouldn't be healthy enough to return - but it would at least give him a chance.

Backup Matt McGloin will start in Carr's absence. Carr has passed for 3,933 yards and 28 touchdowns with six interceptions this season.

Broncos may start Lynch in Week 17
The Denver Broncos were eliminated from playoff contention on Sunday night with a loss to the Chiefs, and that has them pondering if they will start rookie quarterback Paxton Lynch for their season finale against the Raiders, according to Cameron Wolfe of the Denver Post:

Kubiak said he will make a decision on if Paxton Lynch will start over the next couple of days.

Lynch has appeared in three games this season, including two starts, completing 49/83 passes for 497 yards, two touchdowns and an interception.

Bengals place Eifert on IR
The Cincinnati Bengals announced that they have placed tight end Tyler Eifert on injured reserve, ending his season:

Eifert is dealing with back and neck injuries that have limited him all year. He caught 29 passes for 394 yards and five touchdowns in just eight games this season.