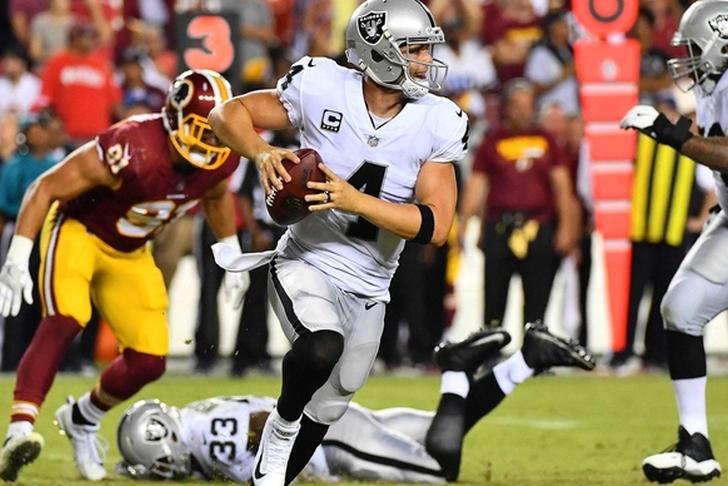 Week 5 of the NFL season kicked off last night with the New England Patriots holding on for a 19-14 win over the Tampa Bay Buccaneers. It's also the first week of scheduled bye weeks, meaning that four teams (Broncos, Falcons, Redskins, Saints) will not be playing this weekend, but there is still plenty happening around the league. Here's everything you need to know:

Derek Carr could return from back injury next week
Oakland Raiders quarterback Derek Carr was expected to miss 2-6 weeks with a fracture in his back that he suffered in Sunday's 16-10 loss to the Denver Broncos, but that may not be the case.

According to ESPN's Stephania Bell, Carr - who will not play Sunday - could return for Oakland's Week 6 matchup against the Los Angeles Chargers.

On ESPN’s NFL Live, @Stephania_ESPN reported that Raiders QB Derek Carr has improved and could play as early as next week vs Chargers.

Carr has passed for 753 yards with seven touchdowns and two interceptions so far this season.

Josh Norman to miss four weeks
Washington Redskins cornerback Josh Norman suffered a rib injury in Monday's loss to the Kansas City Chiefs. Head coach Jay Gruden said after the game that Norman would miss "multiple weeks" with the injury, and Norman revealed on Twitter that he will be out for four weeks.

Norman has 14 tackles with two forced fumbles and four pass breakups this season.

Marcus Mariota will be game-time decision with hamstring injury
Tennessee Titans quarterback Marcus Mariota was forced to leave the team's 57-14 loss to the Houston Texans on Sunday in the third quarter due to a hamstring injury, and that injury is threatening to keep him out of Sunday's game against the Miami Dolphins, as he is a game-time decision.

However, Mariota expects to play.

"I think if I'm able to move around and I'm able to hand the ball off, and am able to drop back, then I'll definitely play," Mariota told reporters Friday. "It's a tough decision. ... To that point, I'm going to do my best to get healthy, and hopefully, I'll be ready to go."

Mariota has thrown for 792 yards, three touchdowns, and three interceptions so far this season. He also has rushed for 116 yards and three more scores.