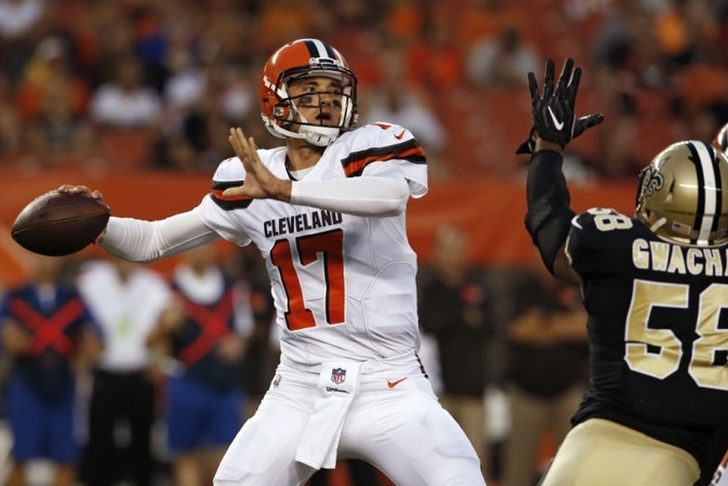 The second week of the NFL preseason has just one game left, with the Cleveland Browns taking on the New York Giants Monday night. As a result, the rumor mill is heating up with all the latest on position battles, injuries, potential cuts, signing and more. Here are top the NFL rumors and news you need to know:

Browns Leaning Toward Brock Osweiler As Starter
The Cleveland Browns haven't decided on a starting QB, but they do have a front-runner. It's Brock Osweiler, whom the Houston Texans salary-dumped on the Browns this offseason.

A solid night could lock up the #Browns job for Brock Osweiler. Hue Jackson solicited opinions of vets: Majority believed Brock is the guy.

At one point, the #Browns thought they would cut Brock Osweiler.
Now? He's a sound game away from being their starter for the season.

The Browns face the Giants tonight at 8 p.m. ET, so all eyes will be on Osweiler as he gets the start again. He was anything but solid against the Saints, completing 6 of 14 passes for just 42 yards. He was outplayed by both rookie DeShone Kizer (now the No. 2) and Cody Kessler, who has fallen to the third.

When Jets Will Pick Starting QB
The Jets know when they'll name their starting QB for this season. Head coach Todd Bowles told reporters Monday that he'll name the starting QB next Monday (Aug. 28th). It's a three-man battle between Josh McCown, Christian Hackenberg and Bryce Petty. Bowles hasn't tipped his hand, but the veteran McCown is the heavy favorite. Petty has yet to even take reps with the first time, while Hackenberg failed to impress after getting the start in Week 2 of the preseason against the Lions. He didn't have much help, but he completed just 2 of 6 passes and both completions were behind the line of scrimmage. Basically by default, McCown is in line to get the starting nod.

Corey Davis Ahead Of Schedule
After being sidelined for much of the pre-draft process and then again with a hamstring injury he suffered in the preseason, WR Corey Davis is close to returning. In fact, he's actually ahead of schedule for his return. Head coach Mike Mularkey told ESPN that Davis will play in Week 4 of the preseason, "if he continues to progress like he is." Davis won't play in Week 3.

"Obviously, it would be really good for him to get into one, but we want him for the season, not for a preseason game," Mularkey said.

Davis was the No. 5 pick in the NFL Draft and the Titans hope he can quickly become a top option for QB Marcus Mariota.