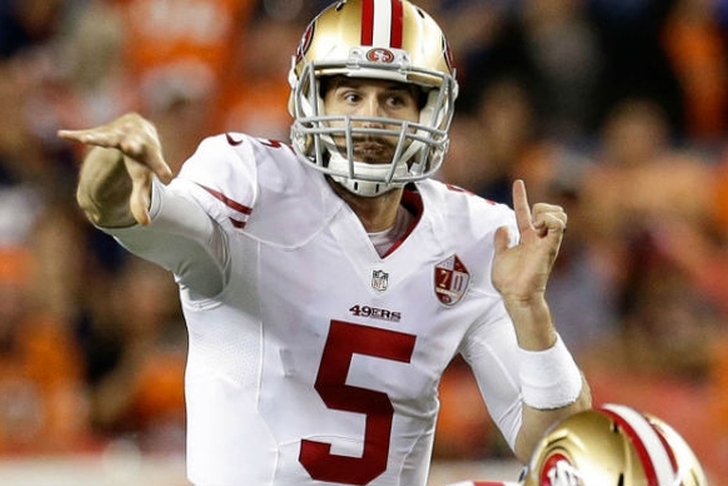 We're already a quarter of the way through the season as Week 5 of the NFL season gets fully underway tomorrow. As is usually the case this time of year, there are several key injuries that will impact this weekend's games. Here is all the latest news and rumors you need to know:

49ers want Ponder to start?
San Francisco 49ers quarterback Blaine Gabbert has been one of the worst QBs in the NFL during San Francisco's current 4-game losing streak, and many are calling for him to be benched. However, instead of the team turning to backup Colin Kaepernick, some in the locker room want third-stringer Christian Ponder to get the starting job, according to Matt Maiocco of CSNBayArea:

While the most obvious move would be to promote Colin Kaepernick into the starting role, sources told CSNBayArea.com on Friday morning that there is some support among the team’s offensive players for Christian Ponder to move ahead of both Gabbert and Kaepernick.

“Ponder is the best option for quarterback on the roster,” said a locker-room source.

Ponder, a fifth-year NFL veteran, won a roster spot with the 49ers after being a late arrival in training camp. The 49ers signed Ponder on Aug. 16 to take the roster spot vacated by Thad Lewis’ season-ending knee injury.

Ponder last appeared in a game for the Minnesota Vikings in 2014. In two appearances with the team that season, he completed 50 percent of his passes for 222 yards and two interceptions.

#49ers and QB Colin Kaepernick are closing in on a restructured contract to alleviate concerns regarding injury guarantees, source said.

The reworked Colin Kaepernick contract, which could be done today, would include giving him an opportunity to void after this season

My understanding of Colin Kaepernick’s redone contract is it eliminates guarantees in 2017 & cuts off the final 3 years. A shorter deal.

Kaepernick played in nine games last year before being benched in favor of Gabbert, passing for 1,615 yards, six touchdowns and five interceptions. He also had 256 rushing yards and touchdown on the ground.

Newton to miss MNF
The Carolina Panthers are hoping to turn their season on Monday night against the Bucs, but they'll now have to do it without the reigning MVP. According to Joe Person of the Charlotte Observer, Cam Newton will miss the game as he continues to recover from a concussion. Backup Derek Anderson will start.

Cam Newton is OUT for Monday game vs. Bucs.

Ron Rivera says Cam is "antsy -- he can't help himself."

Newton suffered the concussion in the second half of Carolina's loss to the Falcons last weekend. It is only the third game he will miss in his career.

Anderson filled in admirably against Atlanta, completing 74 percent of his passes for 172 yards, two touchdowns and two interceptions. The 12-year veteran has started two games for the Panthers in Newton's absence, both have come against Tampa Bay. He has combined to pass for 507 yards, three touchdowns and no interceptions in those games - both of which were wins for the Panthers.