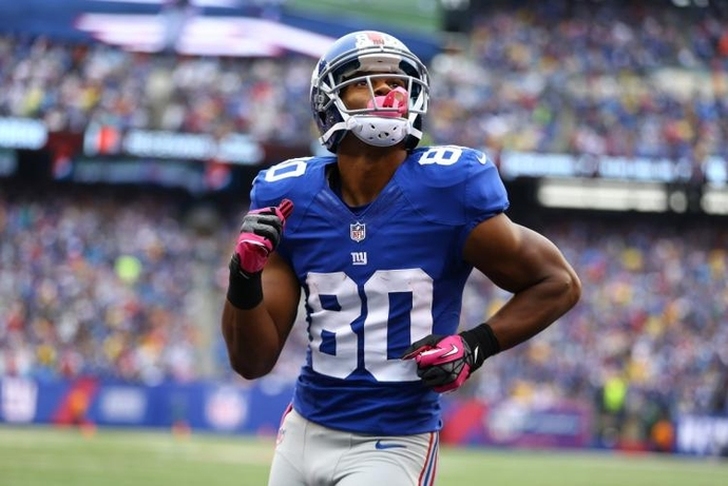 "We are concerned with Charles' knee situation," McDermott told the Buffalo News. "It's something we have to manage moving forward in order to have him on the field for us, which is important moving forward. He's a weapon for us."

Clay has battled knee issues since he joined the team in 2015. Clay's issues could be why the Bills brought in Gary Barnidge for a visit earlier this offseason. In other Bills news, Buffalo signed LB Gerald Hodges to a one-year deal.

Victor Cruz Down To Two Teams
UPDATE: The Bears and Cruz have agreed to a deal.

The original story is below:
It appears that former New York Giants WR Victor Cruz is deciding between two teams to play for in 2017. Cruz said on a radio show today that he's down to either the Ravens and Bears. The Ravens are thin at WR right now, but Chicago needs help as well. Cruz would have to compete with Markus Wheaton, Kevin White, Cameron Meredith and Kendall Wright for passes in the Bears' offense. Meanwhile Baltimore has Breshad Perriman, Mike Wallace as the notable targets.

On that same show, Cruz offered a wild theory as to why he struggled last year: they stopped throwing him the ball so it would be easier to justify cutting him at the end of the year. However, Cruz has not been the same player because of injuries and the stats show it: he has two TDs since the end of 2013 season.

Richard Sherman's Issues With Seattle
In a longform piece for ESPN The Magazine, Seth Wickersham breaks down the issues Richard Sherman has with the Seahawks and why the trade rumors came around Sherman surfaced this offseason. There's a lot to delve into, but we've grabbed the more notable parts below (I'd recommend reading the entire piece).

- Sherman had issues moving past Super Bowl XLIX: This one is pretty clear, given Sherman's comments last year. The ESPN piece reports Sherman thinks the Seahawks should have won multiple Super Bowls by now. He's frustrated they haven't yet and he's placed the blame on two people: Pete Carroll and Russell Wilson.

- Sherman (and others) think Carroll is too easy on Wilson and the offense: Both Carroll and Wilson have an overtly positive mindset, something that has begun to grate on several players. When the Seahawks are winning, it's great. But when they lose close games because of the offense and Carroll doesn't criticize the offensive players, Sherman and others have a problem with it. Several players, per former RBs coach Sherman Smith, want Carroll to call out Wilson in front of the team. That won't happen.

- Wilson is divisive in the locker room and here's what Wickersham writes: Wilson has been a divisive figure almost from the moment he earned the starting job, long before he became the most famous and highest-paid Seahawk. It seems to go beyond the normal jealousy aimed at most star quarterbacks. Teammates privately seem to want him exposed, but ask them why, or on what grounds, and their reasons vary. A man who vowed to live in transparency -- Wilson famously announced that he was refraining from premarital sex with his then-girlfriend, Ciara -- required guests to sign nondisclosure agreements before entering his box at Mariners games. After the Super Bowl against Denver, team management "fell in love with Russell," in the words of a former high-level staffer; defensive players would see him in executives' offices and wonder, "Why not me?" Pettiness grew. In 2014, Bleacher Report reported that some black teammates "think Wilson isn't black enough." Every Christmas, Wilson gives each player two first-class tickets on Alaska Airlines, one of his endorsements. "It didn't cost him anything," one Seahawk told an assistant coach last year. "Big deal."

- Sherman can rub teammates the wrong way: "He's always looking at what other people are doing," a former assistant coach who has had many talks with Sherman told ESPN. "He's made it personal. It's your fault we're not winning. It wears guys thin."

- Sherman did consider leaving, but everything is fine now. Here's one of the final parts of the article (and an overlooked part as well): This offseason Sherman and Carroll held several private conversations. Sherman had told friends that he allowed himself to imagine playing for the Cowboys, maybe the Patriots, hoping Lynch would come out of retirement and join him in New England. But unless bad teams like the Bills or Browns gave up two first-round picks, he wasn't going anywhere. By the draft, both sides were tired of the drama. The conversations turned into Sherman asking, "How do we get back to playing at the highest level?" It's a new team this year: The coaching staff is younger, and Carroll has pledged to get back to running the ball more, to returning the offense to the version that won it all four seasons ago. The night before reporting for offseason workouts, Sherman sent a few tweets that ended with an affirmation that couldn't have been said better by Carroll: "Honestly a lot of times nightmares come before the dream."

Carroll seemed to have done it again, flipping despair into hope. People in the building wondered how Sherman would respond to a hit to his pride, returning to Seattle after he had set the stage to be shipped. But he went about his job as if nothing had happened. All business. He's tutoring the young defensive backs, drafted to carry on his legacy. Maybe Sherman needed to dream of playing elsewhere to realize how good he has it. Or maybe it's all just believable now in spring but breakable come autumn, after the inevitable incomplete throw at the goal line.

- So while you'll see plenty of stories today cherry-picking various points of the article and pointing out the detailed issues Sherman has, remember that Sherman and the Seahawks are getting along right now. At least, for the time being.

Odell Beckham, Jr. Still Not At OTAs
Odell Beckham was supposed to report to the Giants' OTAs today, after finalizing his massive shoe deal with Nike. But that hasn't happened, reports ESPN. There are rumblings that Beckham wants a new contract, but neither Beckham nor his representatives have said anything. OTA's are voluntary, but the vast majority of players report and teams want everyone there. There's no word yet on when Beckham will report and there's nothing to panic about yet for Giants fans, but it is something worth monitoring.