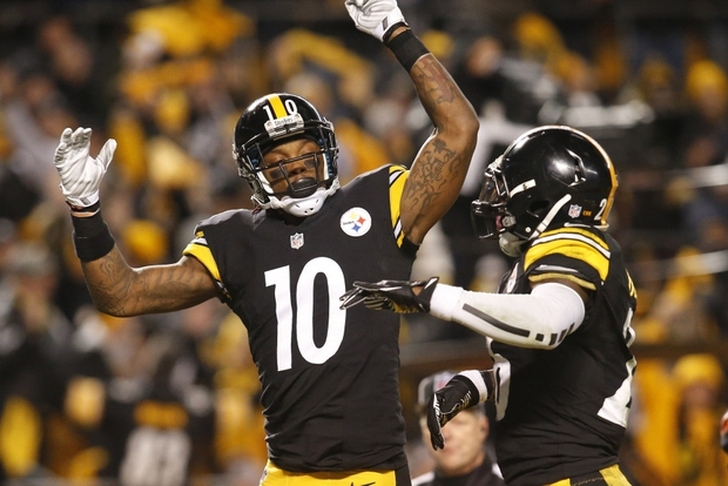 Martavis Bryant Reinstatement
The Pittsburgh Steelers are still waiting for WR Martavis Bryant to be fully reinstated by the NFL. That has not yet happened.

"Upon his conditional reinstatement in April, Martavis Bryant was made aware it was only the beginning of a process toward a return to being a full contributing member of the Pittsburgh Steelers," GM Kevin Colbert said in a statement. "We have been informed by the NFL that Martavis is still in the process of being fully reinstated. Until that time, Martavis will be permitted to take part in off-the-field team activities at training camp, but he will not be permitted to practice or play in any games."

There remains no timetable for Bryant to return from his year-plus suspension for marijuana. Of course, given the NFL's penchant for taking their time with theses cases, it might be awhile.

Le'Veon Bell Holdout
Sticking with the Steelers, star RB Le'Veon Bell isn't showing up for the start of training camp and likely won't be for at least a few days.

The #Steelers had their conditioning run at 4 pm & RB Le'Veon Bell is nowhere to be found. Expected to be away from camp several weeks.

Bell still has yet to sign his $12.1 million franchise tag tender, as he was hoping to get a longer and more lucrative deal from Pittsburgh this offseason. He wants to be paid like a RB1 and a WR2, not just a top-tier RB.  Teammate Antonio Brown said he wants Bell at camp rather than holding out. Bell could do what Eric Berry (who also a franchise tag player this time last year) and hold out until the end of August.

Mike Glennon Is The Bears QB
The Chicago Bears are shutting down any possibility of a QB battle between Mitchell Trubisky and Mike Glennon.

"Glennon's here for a reason," GM Ryan Pace told CSN Chicago. "We evaluated him over the years. We’re very confident in him. Glennon’s our starter and we’re confident with that. This thing is going to have to play out. But Mike Glennon is our starting quarterback and I don’t think now is the time to deal in hypotheticals going forward."

The Bears drafted Trubisky with the No. 2 overall pick in this year's draft and he's their QB of the future. But the present belongs to Glennon, whom the Bears signed away from the Tampa Bay Buccaneers.

Latest Signings And Extensions
It's been a busy day in the NFL, with a few players signing contracts and one getting a new contract. Below, we have the latest signings and a quick blurb on what they mean.

Orlando Franklin Signs With Saints
It's a one-year deal for Franklin, who was dumped by the Chargers earlier this offseason. He might not start for the Saints, who have Andrus Peat and another free agent pickup in Larry Warford. However, Franklin does provide some more veteran depth for an offensive line that has faced some injuries already.

Alejandro Villanueva Gets Extension From Steelers
The Steelers are back in this piece once again. They've signed starting RT Alejandro Villanueva to a four-year, $24 million deal. It's a big pay raise for Villanueva, who was an exclusive rights free agent set to make just $615K this year.

Erik Walden To The Titans
After an 11-sack season with the Colts, Walden has found a new home in the same division. He's joined the Titans on a one-year deal to provide some pass rushing depth. He'll backup Derrick Morgan, Brian Orakpo and likely Kevin Dodd, though don't expect another double-digit sack season.