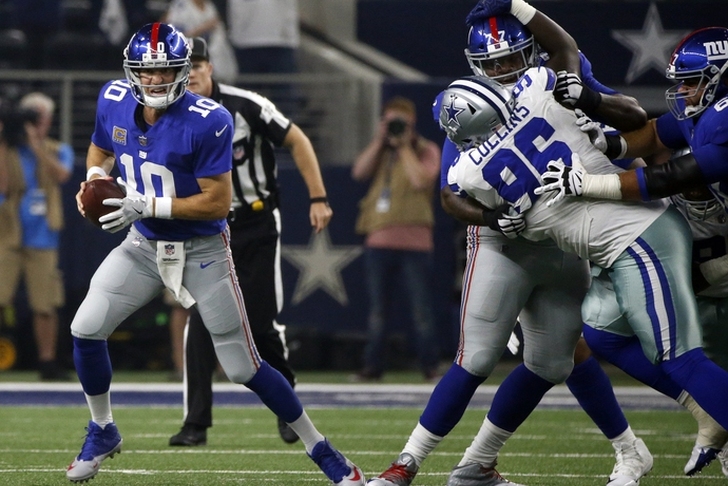 Week 6 of the NFL season kicked off Thursday night with the Philadelphia Eagles getting a big road win over the Carolina Panthers, and games are set to resume tomorrow with 12 contests. The trade deadline is just over two weeks away, and as such, there are plenty of trade rumors flying around the league. Here's everything you need to know:

Eli Manning addresses trade rumors
Following an 0-5 start to the season, there have been rumors that the New York Giants may look to trade quarterback Eli Manning, with many feeling that the Jacksonville Jaguars would be a logical suitor. Manning addressed those trade rumors for the first time on Friday and reiterated his desire to stay with the Giants.

"I've not heard [the Jacksonville speculation], I've not felt it, not thinking about it," Manning told Newsday. "I don't want to play anywhere else. I love this team, love this organization, and I want to be here."

"That's always the goal [staying with one team]. You always want to come to a place and make an impact, stay in one spot, and I think that's always the mindset. I hope that will be the case. Obviously, in this league, things can change, and if we have to make decisions, we'll figure it out."

Manning, who has spent his entire 14-year career with the Giants, has passed for 1,338 yards with eight touchdowns and five interceptions so far this season.

"Nothing" to rumored talks between Broncos, Cowboys about running back trade
A court ruling this week allowed the NFL to reinstate Dallas Cowboys running back Ezekiel Elliott's six-game domestic violence suspension, and while Elliott and the NFLPA are fighting that ruling, there's a possibility that he will begin serving that suspension on Oct. 22 against the San Francisco 49ers.

As such, there were rumors that Dallas was interested in trading for Denver Broncos running back Devontae Booker - who is the odd-man out of their rotation behind C.J. Anderson and Jamaal Charles - but there is nothing to those rumors, according to ProFootballTalk's Mike Florio.

Per a source with knowledge of Denver’s thinking, there is nothing to the trade talk. The Broncos like Booker, and they intend to keep him.

Booker only has three rushes for 14 yards this season.

Titans hoping to get Derrick Henry more touches
Even though running backs DeMarco Murray and Derrick Henry split carries for the Tennessee Titans, Murray is the lead back who receives most of the work. However, Murray received much more of the workload last week with 18 touches compared to only four for Henry.

Henry has 43 carries for 187 yards and a touchdown so far this season.