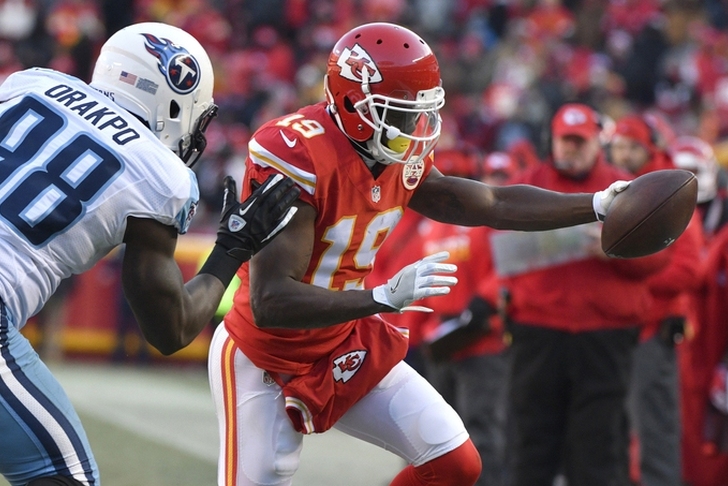 The NFL offseason rumor mill isn't as chaotic as it was during free agency, though the start of OTAs have provided some buzz. The main story remains where WR Jeremy Maclin will end up after his release by the Chiefs. However, there's also some injuries and a contract extension update for a QB that's generating interest. Here are all the latest NFL rumors you need to know.

Jeremy Maclin To Visit With Bills And Ravens
The Jeremy Maclin free agency tour is making two stops this week. Maclin will visit both the Bills and Ravens in the coming days.

Former Chiefs' WR Jeremy Maclin is scheduled to visit Buffalo today, with plans being made to visit Baltimore on Wednesday, per source.

Maclin's visit with Buffalo has already finished and he's left without a new contract. There was a report earlier this week that Maclin was already in contract talks with Buffalo. Given the demand Maclin will generate, it's not a major surprise he's taking his time. Baltimore now has a chance to land Maclin and they are in desperate need of WR help. Both teams were on my list of teams that Maclin could sign with.

UPDATE:
The Bills say that Maclin is still on his visit with the team.

Kirk Cousins Contract Talks Going Nowhere?
QB Kirk Cousins was franchise tagged once again this offseason, but he still doesn't have a new contract with the Washington Redskins. Mike Jones of The Washington Post reports in a recent mailbag that he doesn't really have an explanation why there is no deal and that talks aren't progressing.

"From everything I can gather, no progress has been made, and there aren’t any intense negotiation conversations going on," Jones writes. "But Cousins keeps on cranking, working on improving his mechanics and command of the offense and timing with his new receivers. It doesn’t appear that the contract situation is weighing on him at all."

The deadline for players on the franchise tag to work out a new deal if July 15. If that doesn't happen, Cousins will have to play out the season on the franchise tag (at a cool $23.9 million). And if that deal doesn't get done, the rumors of a Cousins trade or Cousins leaving in free agency will only continue.

Taylor Decker Could Miss Start Of Season
The Detroit Lions revealed some bad news Tuesday, when the team announced that left tackle Taylor Decker underwent shoulder surgery after suffering an injury at OTAs last week. There is no timetable for Decker's return, but head coach Jim Caldwell said Decker could miss the start of the season.

That's a worrisome possibility for the Lions, who were banking on Decker to be the starting left tackle once again after a solid rookie year. Cornelius Lucas and Joe Dahl got the first-team reps in practice today at left tackle, but neither match the ability and great play Decker provided last year. Dahl has never played a snap at tackle in the NFL, while Lucas has been unable to provide consistent play when he's seen the field. Free agent addition Ricky Wagner is expected to stay at right tackle.

Mike Williams Injury Update
The Los Angeles Chargers battled injuries last year and that's the case early for rookie WR Mike Williams. He will miss the rest of pre-camp workouts as he deals with a herniated disk in his back. In the grand scheme of things, that's an injury that shouldn't cause Williams to miss any games. But, it is a concern for a team that was decimated by injuries last year. Plus, any time Williams misses as a rookie is important. There's a steep learning curve for rookies and missing time with injuries could hurt Williams' development this year.