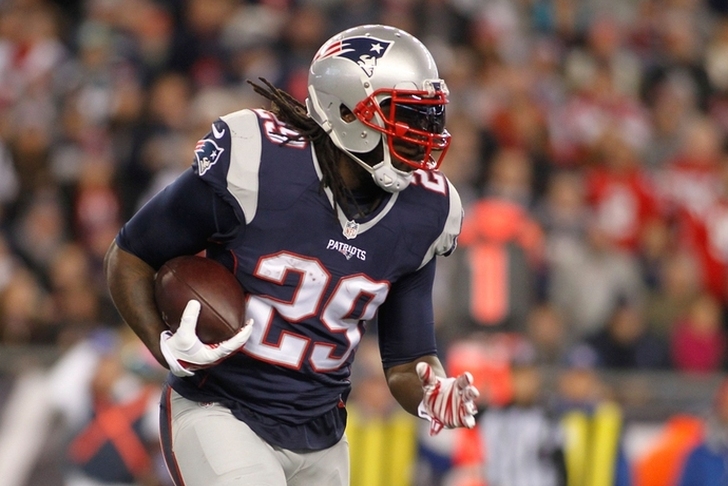 Lions Interested In LeGarrette Blount
The Patriots added two running backs this offseason, meaning veteran LeGarrette Blount likely won't be back. But two other teams have interest in Blount, reports Charles Robinson of Yahoo. Both the Giants and Lions are "mulling" adding Blount, as both are in the market for a bigger back. The Lions didn't draft a RB this year, leaving them with a platoon of the undersized Theo Reddick, injury-prone Ameer Abdullah and then Zach Zenner. Abdullah is the likely starter if Blount isn't signed. In addition, Lions GM Bob Quinn knows Blount from their time together in New England. Blount racked up 18 TDs and 1,161 yards on 299 carries last year for the Patriots.

Reuben Foster's Shoulder Injury
The 49ers traded back into the first round to take Alabama LB Reuben Foster, but there are concerns from outside the organization about the health of Foster's shoulder. ESPN's Adam Schefter reports teams feared Foster's shoulder problem could cost him his rookie season.

Despite surgery on his right rotator cuff, Foster's right shoulder was worrisome enough that some teams did not consider drafting him.

"The surgery didn't take," said one well-placed source with knowledge of the injury.

The 49ers are comfortable with the health of Foster's shoulder, although Schefter reports they know there is added risk. If Foster does need another surgery, it could be another Shaq Lawson situation. The 49ers clearly don't think that's the case, as they were willing to take Foster at No. 3 overall.

Gary Barnidge Visiting Bills
The Bills could be getting some help at tight end, as former Cleveland Browns TE Gary Barnidge is coming for a visit.

There's a connection between Barnidge and head coach Sean McDermott, as both were in Carolina during the 2011 and 2012 seasons. Barnidge was cut by the Browns after they drafted David Njoku in round one. Barnidge caught 55 passes for 612 yards receiving and two touchdowns last year for the Browns. He would likely be the No. 2 TE on the roster if signed, behind Charles Clay and ahead of Nick O'Leary.

Cardinals And Blaine Gabbert?
The Cardinals didn't get a QB in the NFL Draft, but they are "in talks" to bring on a former first round pick.

Cardinals in talks with quarterback Blaine Gabbert, according to a source

Gabbert has struggled in stops with both the Jacksonville Jaguars and San Francisco 49ers. The Cardinals likely aren't looking at Gabbert as a potential future starter, but as a backup. Both Carson Palmer and Drew Stanton are in their 30s. Gabbert might need to beat out Stanton for the backup job to make the roster, if he's signed. Arizona might not want to carry three non-rookie QBs next year.