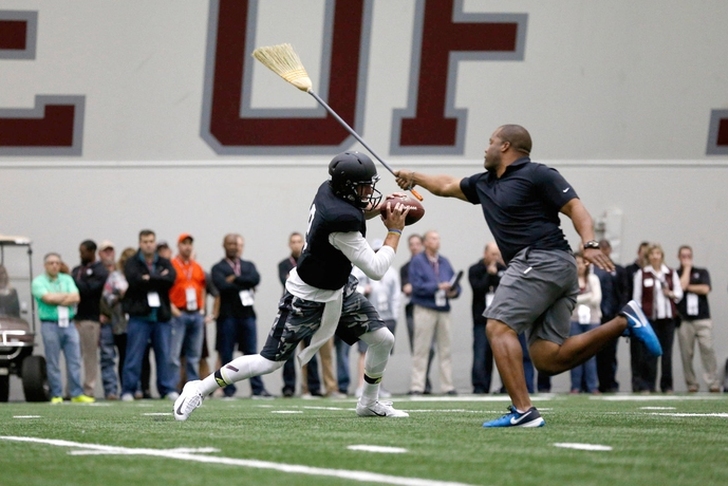 The NFL rumors are full steam ahead now that we are already over a week into the new calendar NFL year. There are still plenty of big-name free agents available, but some notable players like wide receiver Allen Hurns and veteran running back Frank Gore are also on the free agent market. Plus, recent news on Johnny Manziel and his pursuit for an NFL comeback. Here are all the latest NFL news and rumors you need to know:

Johnny Manziel Throwing At University Of San Diego's Pro Day?
The former Heisman trophy winner Johnny Manziel is attempting to make his comeback to the NFL. According to Bruce Feldman, Manziel is expected to be the quarterback throwing to receivers at University of San Diego’s Pro Day Thursday morning. This figures to be the first time NFL teams have had a chance to see Manziel throw since his days with the Cleveland Browns.

Manziel has struggled on and off the field since the Browns selected him in the first round of the 2014 NFL Draft. He has played in 14 career games and has seven touchdowns and seven interceptions.

In addition to San Diego's Pro Day, the 25-year-old will also participate in the Spring League, which is a four-team, two-week showcase for free agents in April. If Manziel fails to convince an NFL team to sign him, he may land in the CFL.

4 NFL Teams Interested In Allen Hurns?
Allen Hurns' time with the Jacksonville Jaguars is over. Two years after signing him to a lucrative contract extension, the Jaguars cut Hurns. In a limited free agent market for wide receivers, Hurns is one of the top players available. According to ESPN's Adam Schefter, the Dallas Cowboys, New York Jets, Baltimore Ravens, and Browns are all "vying" for Hurns.

Hurns had a breakout year in 2015, emerging as one of the Jags' top WRs. But in the last two years, his numbers have regressed, and he was an obvious cut candidate. Despite the regression, numerous NFL teams are in the market for a big-play producer like Hurns. He won't demand a contract like the one he had with the Jags, but he will draw interest.

Frank Gore Visiting Miami?
Last week the veteran running back was nearing a deal with the Detroit Lions, but then Detroit signed running back LeGarrette Blount. According to Adam Schefter, Frank Gore will visit the Miami Dolphins on Thursday.

Clearly, the Dolphins are looking for a veteran to compliment running back Kenyan Drake, Miami also had a visit with DeMarco Murray over the weekend. Gore has surpassed 1,200 yards from scrimmage every season since 2005. Gore will turn 35 years old in May.