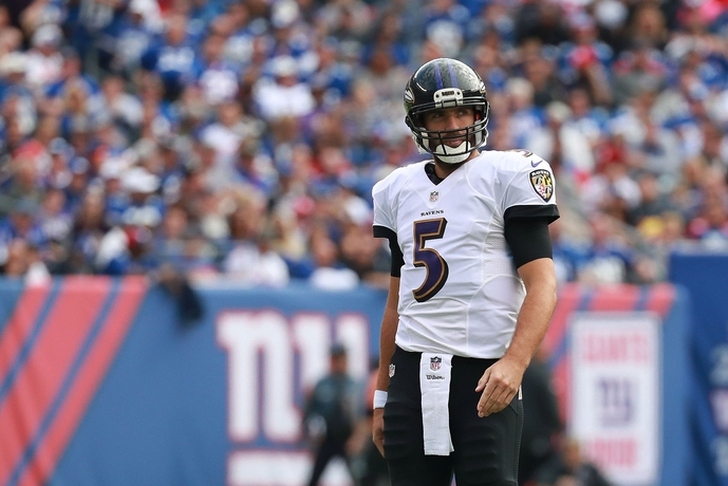 The NFL rumors continue to swirl, even with the NFL Draft over and most of the top NFL Free Agents signed. However, teams continue to deal with the fallout from the draft, as players like Joe Flacco aren't happy with their team's selections. Plus, some notable veterans like Adrian Peterson remain unsigned. Here are today's top NFL rumors you don't want to miss:

Joe Flacco Ignoring Lamar Jackson?
Much has been made about Ben Roethlisberger's comments about the Steelers drafting Mason Rudolph, but the Steelers aren't the only AFC North team with drama in the QB room. Ravens QB Joe Flacco still has yet to talk to Lamar Jackson, as he continues to ignore all texts and call from Jackson.

It's understandable that Flacco might not want to help the player drafted to replace him, but it's a bad look for Flacco to treat Jackson like the creepy guy from Tinder and ghost him entirely. At some point that will change, but Flacco's apparent attitude doesn't bode well for him helping Jackson develop.

Mark Ingram Holdout?
It's not technically a holdout, because we're still in the "voluntary" phases of the offseason, but Mark Ingram is staying away from the New Orleans Saints. Ingram wants a new contract, even as he's set to serve a four-game suspension and won't report to the team until mandatory minicamp. Head coach Sean Payton isn't too happy.

"He and I spoke, so it wasn't a surprise to us that he's not here," Payton told ESPN. "I don't agree with it. But it is optional, and that's his choice."

Ingram recently switched agents as well, but his suspension kills any chance of getting that new deal right now. On a related note, the Saints won't add a veteran running back, instead rolling with a young group of Alvin Kamara, Trey Edmunds, Jonathan Williams and sixth-round rookie Boston Scott.

Adrian Peterson Return?
The past two years have not gone well for Adrian Peterson, as he's struggled with injuries and ineffectiveness as he ages. At age 33, he told NFL.com that he's healthy and wants to keep playing in the NFL.

"I'm healthy and I'm ready to roll," Peterson said. "If you want someone to help you win a championship and be productive -- be very productive -- you know how to contact me."

Peterson claims he has heard from multiple NFL teams about a return, but that nothing is close. He also said he would return to the Saints, if called.

"For whatever reason, it just didn't work out (in New Orleans), but when I got my shot in Arizona, I showed what I was able to do," Peterson said. "I know once I get back out there, I'll be blessed with a healthy season and show people I'm still the best in the league."

Behind a leaky Cardinals offensive line, Peterson averaged just 3.5 yards per carry. He might have to wait until a notable injury before a team signs him.