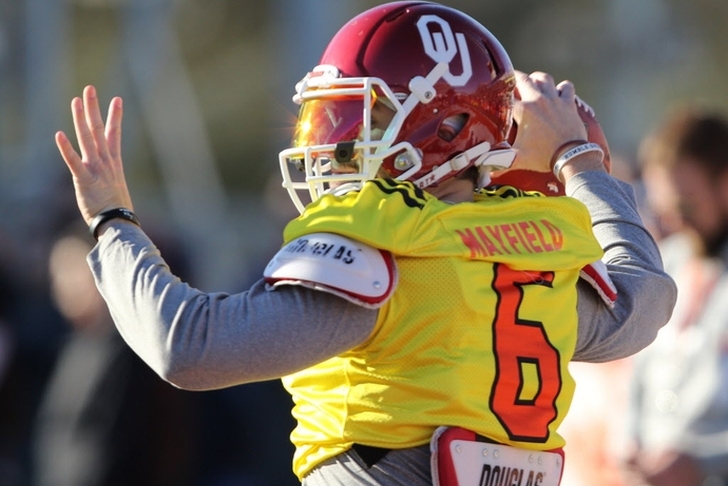 The NFL season will wrap up next weekend when the New England Patriots take on the Philadelphia Eagles in Super Bowl LII, and there are a few questions about a pair of New England's stars going into that game. However, 30 other teams have already entered the offseason and begun their draft preparations with the Senior Bowl taking place this weekend. Here are all the latest NFL news and rumors you need to know:

Browns considering Baker Mayfield with No. 1 pick
Oklahoma quarterback Baker Mayfield was one of the biggest stars of Senior Bowl practices this week, and because of that, the Cleveland Browns are strongly considering him with the No. 1 overall pick in the NFL Draft, according to Charles Robinson of Yahoo Sports.

If Baker Mayfield’s flag wasn’t planted at the No. 1 pick in the draft a week ago, he’s squarely in play for the Cleveland Browns after a strong showing at the Senior Bowl.

As practices wrapped Thursday and NFL personnel men flocked to catch flights out of town, a consensus had begun to form on Mayfield and Wyoming’s Josh Allen, two quarterbacks who have first-round expectations in the upcoming draft. While critics of each continue to be easy to find, both had good showings in terms of building on performances each day. But Mayfield’s skills and on-field mentality left multiple evaluators believing Cleveland is heading into a debate between two players with the No. 1 pick in the draft: Mayfield and USC’s Sam Darnold, who will make his league-wide debut next month at the league’s annual scouting combine.

Rob Gronkowski returns to practice
Patriots tight end Rob Gronkowski was knocked out of their win over the Jacksonville Jaguars in the AFC Championship Game with a concussion, and while he still has not cleared concussion protocol, he returned to the practice field today.

Gronkowski played in 14 games during the regular season, catching 69 passes for 1,084 yards and eight touchdowns.

“No,” Zolak said when asked if Brady would retire after the Super Bowl. “Absolutely not. Especially with Jimmy (Garoppolo) not being here. No, I don’t. I really don’t. I think it’s two more..I think he has two more realistic seasons left.”

Brady, a favorite to win MVP this season, passed for 4,577 yards with 32 touchdowns and eight interceptions..