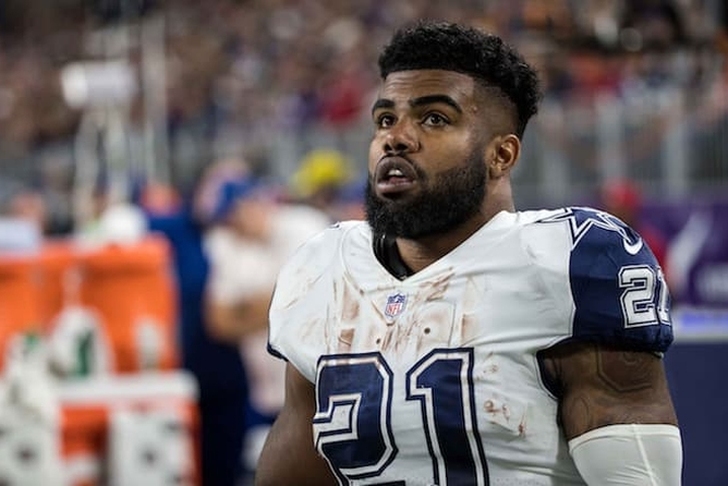 The first full week of the NFL preseason is complete and it's brought a flurry of action around the league. Last week was dominated by the Ezekiel Elliott suspension, and he is now formally filed an appeal, which is bringing more information to light about his alleged domestic violence incident. There is also news about the futures of a couple of starting quarterbacks around the league. Here are the latest NFL rumors and news you need to know:

The suit was filed two days after the alleged domestic violence incident and one day before Columbus, OH police announced they would not press charges against him.

Elliott called police to his house complaining that he had received over 50 phone calls from Thompson between 2:30 am and 10:00 am from various phone numbers, including blocked ones. Rapoport reports that Elliott answered a few times to inform Thompson that she was not supposed to be calling him.

He also claims that Thompson hacked into his email account and found other phone numbers of women Elliott was "messing around" with and called them saying "untruthful things that can hurt his image."

Elliott continues to deny that any domestic violence ever took place and points to the fact that Thompson did not make any accusations against him until she was not allowed into his 21st birthday party following the end of their relationship. This harassment suit was filed after the relationship ended.

The harassment suit does shed light on the relationship between Elliott and Thompson and perhaps provides an ulterior motive to her claims, but it doesn't mean domestic violence didn't take place.

The league has acknowledged that the alleged assault on July 22 didn't occur, but says they have evidence that he committed acts of domestic violence on three separate occasions in the week prior.

“I would love to be...a Redskin the rest of my career,” Cousins told ESPN's Sal Paolantonio. “When you look at the best of the best, those quarterbacks played with one team. And if you point to a couple guys who didn’t, who changed teams, it really was against their will: I think if Joe Montana or Peyton Manning had their way they would have stayed where they had won Super Bowls and played so well. They wouldn’t have played so well. So my desire is to stay with one team my entire career, and that would be Washington.”

Multiple reports indicate that Cousins could get a contract that pays him $30 million a year as a free agent next offseason.

Jay Cutler to make debut for Dolphins this week
The Miami Dolphins announced on their website that Jay Cutler will make his debut in their preseason game Thursday against the Baltimore Ravens.

Cutler, who is expected to be Miami's starter by the time the regular season kicks off, signed a one-year, $10 million deal with the Dolphins last week. He passed for 1,059 yards with four touchdowns and five interceptions in five games for the Chicago Bears last season.