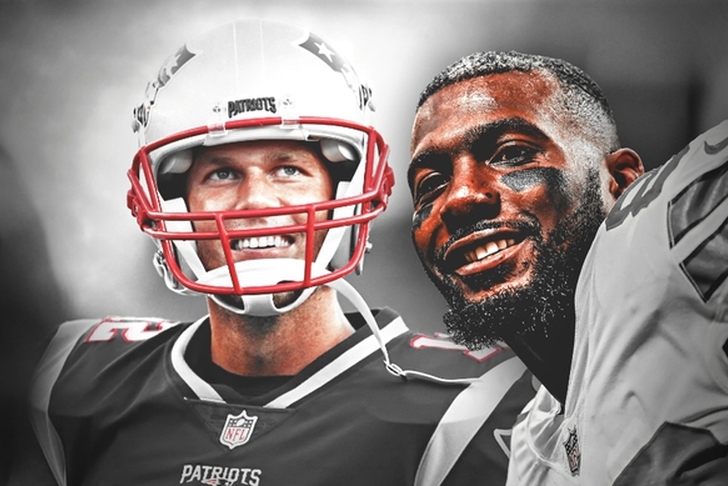 The NFL rumors are swirling right now with teams prepping for Week 3 of the NFL preseason. This week is known as the "dress rehearsal week" where teams will play their starters and give fans an idea of what to expect during the regular season. Perhaps the biggest offseason rumor is where will former Dallas Cowboys WR Dez Bryant play in 2018? Will Dez stay in the NFC East since he wants to play the Cowboys twice a year or will he go to a team ready to make a Super Bowl push? Another rumor is who will be the starting running back for the Seahawks after Seattle took Rashaad Penny in the first round of the 2018 NFL Draft. The last big headline rumor buzzing right now is are the Green Bay Packers trying to trade WR Randall Cobb? Don't miss the latest NFL rumors below:

Dez Bryant to the Patriots?
Where will Dez Bryant play in 2018? This has been a storyline to follow all offseason. The Patriots released WR Kenny Britt on Wednesday and have a thin wide receiver depth chart with Julian Edelman suspended for the first four games. So will New England go out and sign the veteran?

According to NFL Media’s Michael Giardi, the Patriots will "probably not" sign Bryant

Giardi goes on to say that Bryant will likely not be on the Patriots radar, but they may target Jordan Matthews in the middle of the season despite releasing him this offseason. Bryant is 29 years old and coming off a season where he had 69 catches for 838 receiving yards and six touchdowns.

Rashaad Penny Overweight?
The 2018 first round pick has not had much good news around him this offseason. Penny is battling with second-year running back Chris Carson for the starting job on the Seahawks and it appears that Carson is winning. Perhaps the reason Carson is winning is that Penny is not only dealing with a finger injury, he is also overweight. As if Seahawks fans need another Feast Mode (Eddie Lacy) running back.

According to ESPN, Penny weighed in at 236 pounds at Seahawks camp this week which is 16 pounds heavier than what he was at the NFL combine. It isn't too much of a surprise that Penny gained weight now that he is around an NFL nutrition and strength coach. But 16 pounds in a few months is a little alarming.

Penny led the NCAA last season with 2,248 rushing yards on 289 carries, He also had 23 rushing and two receiving touchdowns.

Do you play fantasy football? If so, check out Fantasy Football AF on YouTube!

Packers trading Randall Cobb?
Early on Wednesday, the Ringer's Mike Lombardi reported on his podcast that the Packers have shopped Randall Cobb. Lombardi states that he doesn't know the asking price but he's heard that Cobb is available.

Later in the day, NFL Network's Ian Rapoport disputed a report. "It’s normal for teams to inquire about players entering the last year of their contract," said Rapoport. I know of some that checked on Randall Cobb. But the Packers are not shopping him and expect him contributing on their team."

The Packers drafted three wide receivers in the 2018 NFL Draft but it appears that Cobb is not being shopped by the Packers. Last season Cobb had 66 receptions for 653 yards and four touchdowns. Cobb has topped 1,000 yards only once in his seven-year NFL career.